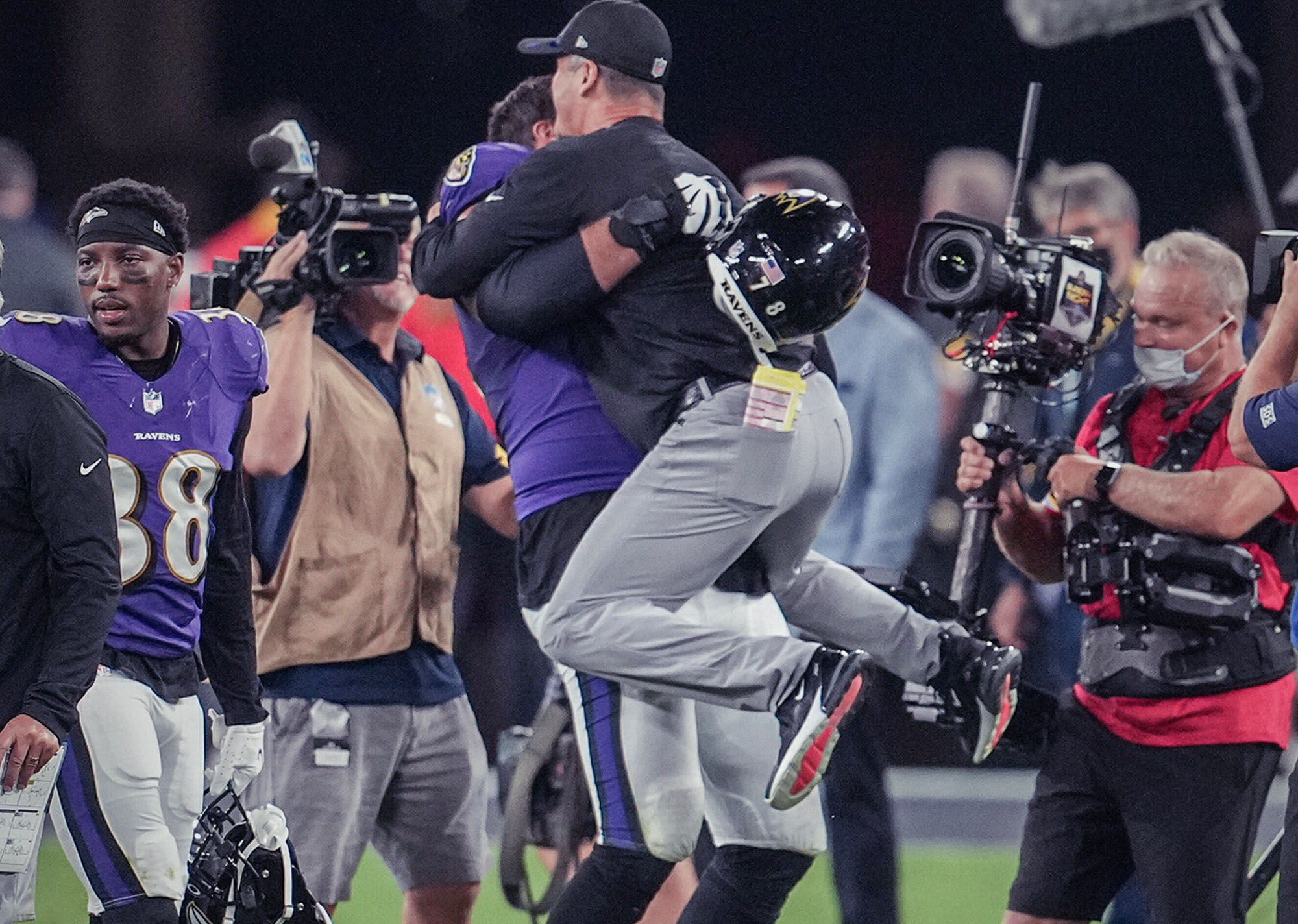 The Baltimore Ravens upset the Kansas City Chiefs in their second consecutive night game to start the season.

The game featured a matchup between two former NFL MVP quarterbacks in Patrick Mahomes and Lamar Jackson, who both won the award in their sophomore seasons.

After dropping the first game of the season to the Las Vegas Raiders in week one, the Ravens didn’t get out to a great start, as Jackson threw a pick-six on the first drive of the game, gifting the Chiefs a 7-0 lead.

However, Jackson responded on the next drive, leading the Ravens 65 yards down the field on a drive that was capped off by a Devin Duvernay touchdown to even the score at 7-7.

Both teams would trade touchdowns in the second quarter, as the Chiefs went into the break with a 21-17 lead.

Kansas City got the ball to start the second half, and immediately picked things up where they left off at the end of the second, as they drove 69 yards in just three minutes on a drive that was capped off with a 40-yard touchdown pass from Mahomes to Byron Pringle.

Baltimore responded again on their first drive of the second half, as Jackson made a herculean throw, jumping into the air and heaving a pass over a defender, to Marquise Brown for a 42-yard touchdown, trimming the lead to just four.

Leading by 11 going into the fourth, Mahomes, in an attempt to escape a sack, made an errant throw, which was picked off by Odafe Oweh.

With a short field, Jackson and the Ravens were able to reach the endzone and cut into the Chiefs’ lead on a two-yard run by the former MVP, which trimmed the deficit to just five points.

Then, after a Kansas City punt, the Ravens drove 63 yards for their second major score of the quarter, taking eight minutes off the clock.

However, their two-point conversion attempt was unsuccessful, meaning the Chiefs could win the game with a field goal.

With a little more than three minutes left and the ball, Mahomes and the Chiefs looked poised to win their second consecutive game of the season, and send the Ravens into week three with an 0-2 record.

But, on second-and-three from the Baltimore 32-yard-line, Clyde Edwards-Helaire was stripped by Jayson Oweh, and Odafe Oweh recovered for the Ravens.

On the ensuing drive, Baltimore ran the ball on three consecutive plays and picked up nine yards, but Kansas City used all their timeouts, forcing the Ravens to make a decision—kick it back to the ever-dangerous Mahomes and leave the game in the hands of their defense, or go for it and seal the victory with a first down.

Coach John Harbaugh elected to go for it, as Jackson picked up three yards and the first down, as the Ravens hung on for their first win of the season.

It was the first time in his career Jackson has beaten the Chiefs—going into the game he was 0-3 against Kansas City despite amassing a 30-5 record against the rest of the NFL.

Jackson said in the post-game press conference Harbaugh asked him if he wanted to go for it on fourth down with the game on the line. “I said ‘hell yeah,’ and I said it again,” he said. “Our offensive line did a great job pushing those guys back, and we got the first down for the victory.”

Next week, the Ravens will be in Detroit taking on the Lions, while the Chiefs will be at home hosting the L.A. Chargers. Kickoff for both games is scheduled for Sunday at 1 p.m.

Cover photo courtesy of the Baltimore Ravens via Twitter