A show down between two back-up goaltenders 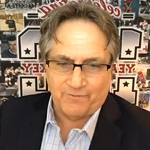 This was a night where the New York Islander’s lost one of the great ones, Hall-of-Famer Clark Gillies, who died Friday.  The Islanders played a tribute video and shared a moment of silence before the start of the game. Gillies was a big part of the dynasty years in the early 1980s winning four straight Stanley Cups and 19 straight playoff series. Players tonight wore a No. 9 decal in the upper right-hand corner of their jersey in remembrance of the former captain.

This night was also a show down between two back-up goaltenders tonight in the New York, Petr Mrazek vs. Semyon Varlamov. Mrazek won the battle, as he stopped 25 of 26 shots helping the Toronto Maple Leafs beat the New York Islanders 3-1 in the newly built UBS Arena, the billion dollar beauty.

Morgan Rielly scored the eventual game winner and added an assist, while Mitch Marner scored a shorty and Pierre Engvall tallied for the Maple Leafs. Zach Parise doubled his season total as he scored to tie up the game before the first period ended. His slow start has management  scratching their heads but now that he has two, the Islanders need more offensive contribution from him and others. This was certainly not the most entertaining of games as the Leafs and Islanders looked tired. Both teams were 7-2-1 in their last 10 and the Leafs are closing out a six-game road trip finishing 3-2-1. Next up for the Leafs are the Anaheim Ducks who are 3-7 in their last 10.

This was a tough loss as the Winnipeg Jets played well enough to win last night, but not good enough not to lose