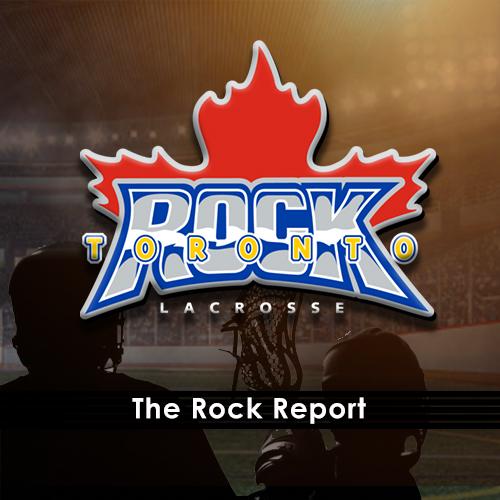 Toronto Falls To 2-2 On The Season

In a spirited contest on Tucker Out Lymphoma Night, the Toronto Rock (2-2) fell by a score of 12-6 to the Buffalo Bandits (3-0) on Saturday evening at KeyBank Center in Buffalo, NY.  The Rock are still winless on the road this season.

“We’re still in the early going here in the season and we have work to do,” said Rock Head Coach Matt Sawyer.  “Our effort was good tonight, but our execution obviously needs to be better in certain areas. We feel we’ll be better for that game and be better next weekend.”

The Rock’s first quarter struggles continued.  Toronto has now been outscored by a total of 12-4 in the opening 15 minutes of each of their first four games.  However, tonight was the first time the Rock were shutout in the first frame, trailing 3-0 after one quarter.

Nick Rose turned in another solid goaltending performance and kept the Rock in the game in the first half.  Toronto rallied in the second quarter, going on a 4-1 run to tie the game with 1:11 left in the half.  Buffalo answered back before the break to take a 5-4 lead into halftime.

In the third quarter, the Rock ran into penalty trouble giving up two power play goals.  To make things a bit more frustrating, when they had their opportunity with the man advantage, they came up empty on a 5-minute power play and surrendered a shorthanded goal.  Buffalo led 9-5 heading into the fourth quarter.

In the fourth quarter, things finally boiled over.  Emotions were running hot all night and a near line brawl broke out with 5:38 to play followed by a couple of scraps in the minutes that followed.  In the end, the Bandits had done the damage on the scoreboard and took home a 12-6 win.

The Rock were without key offensive contributors Tom Schreiber (Short Term Holdout List) and Dan Dawson (COVID-19 Protocol List).  Both players are expected to return for Toronto’s next scheduled game.

Rock Captain Challen Rogers entered the game in search of an individual milestone, four points shy of 100 career points.  With the added offensive responsibilities, given the absences from the Rock lineup, Rogers scored twice and added three assists to run past the century mark and finish the night with five points and 101 for his NLL career.

“I think we were creating good chances, I don’t know if it was a slow start, we just weren’t finishing,” said Rogers.  “I don’t think we quit tonight.  Our first quarter wasn’t our best, but we kept answering the bell.”

Rob Hellyer scored just once but that goal carried some real significance with it.  It was goal number 218 in his career, one more than Rock legend Josh Sanderson.  Hellyer now sits alone in fifth place on the Rock’s all-time goal scoring list.

While Rose’s 38 saves were important to keeping the Rock in the game, Matt Vinc’s 45 saves may have been the difference in the game.  An arm save by Vinc on Rogers, who was in all alone on the Buffalo net, in the first quarter prevented the Rock from getting on the board and set the tone for a great night by the Bandits netminder.

The Rock wore Tucker Out Lymphoma jerseys that were designed by the Bandits for tonight’s game.  The jerseys and shorts will be auctioned off with net proceeds going to pediatric cancer care in memory of Tucker Williams, son of former Bandit and Rock Shawn Williams.  Fans can bid now, with the auction closing on Tuesday evening.

The Rock’s next game will be Saturday, January 15 against the Halifax Thunderbirds at Hamilton’s FirstOntario Centre.  Per recent Ontario government restrictions, the game will be played without fans.  However, the matchup with Halifax will be televised as the NLL’s Game of the Week on TSN at 7pm ET.