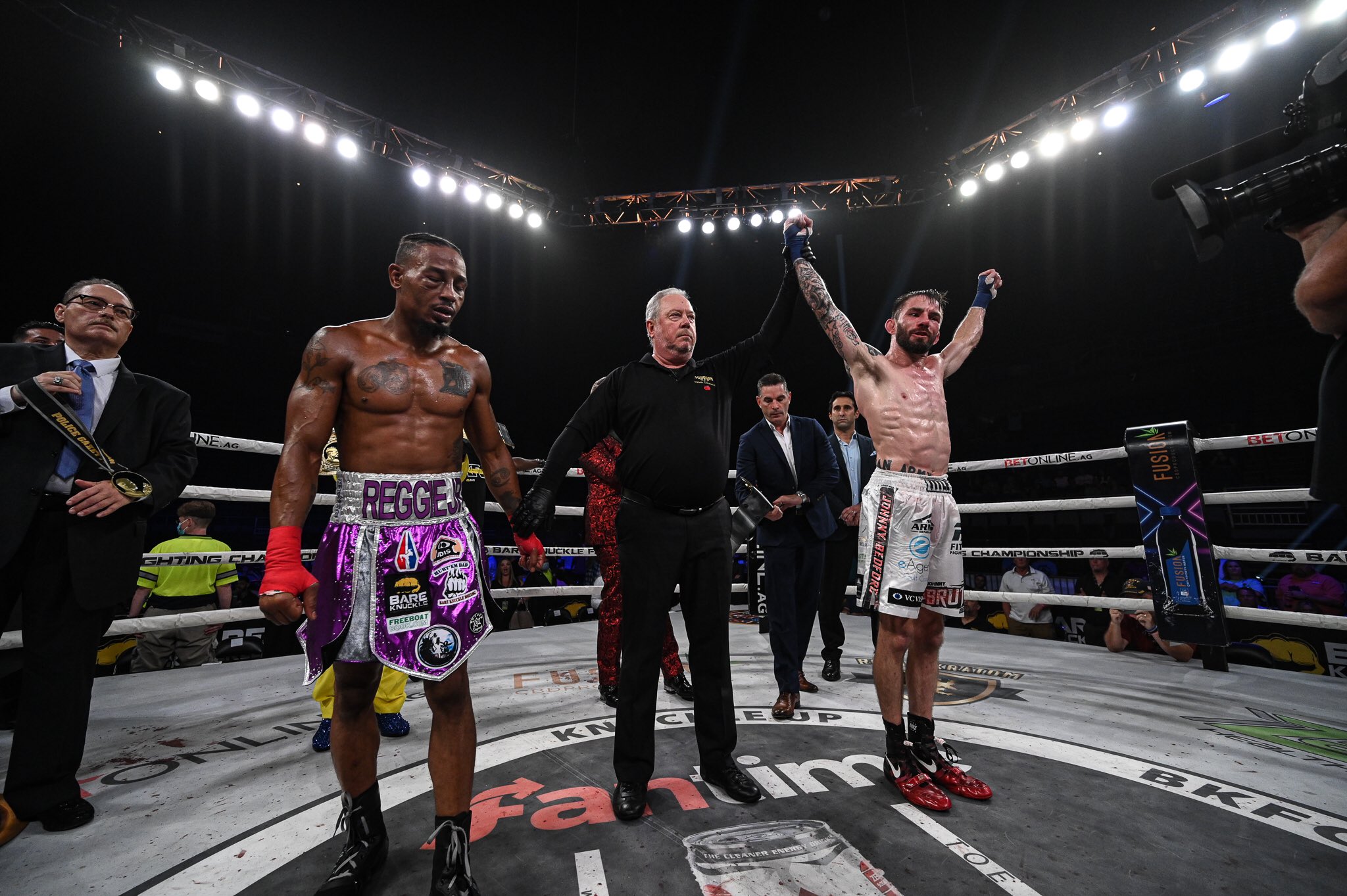 A pair of belts were on the line in the main event of BKFC 20 on Friday (August 20), as Johnny Bedford took on Reggie Barnett Jr. in a rematch of their first fight at BKFC 6 in 2019.

Going into the first fight, both men were undefeated. And, once again, both fighters were even in the loss column going into the rematch, as Bedford won the first fight, and reigned atop the division for two years before being dethroned by Dat Nguyen at BKFC: Knucklemania in February 2021.

Before the fight, Barnett Jr. said it wasn’t a rematch, as a rematch required the same people and he feels he is a completely different fighter than the guy who lost in 2019.

Despite Barnett Jr.’s assertions he’s improved significantly, Bedford said leading up to the fight he would win easily, just as he did in their first clash.

While Bedford’s antics often paint him as the showman, it was Barnett Jr. who stole the show with his walkout—he made his walk to the ring during a live performance of Novocaine Joyride by TikTok star Cody Saintgnue.

Despite claiming he would produce a different outcome from their first bout, Barnett Jr. went down early in the first, as Bedford connected with a right hand that landed flush off a slip.

Later in the round, Barnett Jr. asked for time, as Bedford landed an illegal blow to the back of Barnett Jr.'s head as the two fighters were tied up in the clinch, and Bill Clancy issued a warning to Bedford, instructing him to keep it clean.

Off the restart, Barnett Jr. came out aggressive, driving Bedford back to the ropes and showing some life for the first time in the fight.

He continued the same pace in the second, while Bedford appeared content to let for Barnett Jr. attack and focus on evading and countering.

In the third, Bedford picked up the pressure, pushing the pace, and forcing Barnett Jr. to fight off his back foot. However, his reluctance to keep his hands up allowed Barnett Jr. to land some clean counter punches.

After two strong rounds from Barnett Jr., in the second and third he appeared to show signs of fading in the fourth, and he went down twice. However, Clancy ruled them both slips and not knockdowns, despite some protesting from Bedford.

Both men emptied their tanks in the fifth, and traded shots, as each looked to get the finish. Bedford landed a right hand that stung Barnett Jr., but he responded with a check hook.

After five rounds, the fight went to the judges’ scorecards, and all three give it to Bedford by scores of 48-46, 50-44, and 49-46, as Bedford claimed both the Police Gazette Diamond 135-lb. World Championship and BKFC World Bantamweight Championship belts for the second time.

After being declared the winner, Bedford called out Nguyen, who is the only fighter to beat him in the promotion.

However, while Bedford clearly wants a chance to avenge his lone loss, given the fact Nguyen and the BKFC couldn’t come to an agreement regarding a new contract, and he was stripped of his belts and released, it seems extremely unlikely at this point.