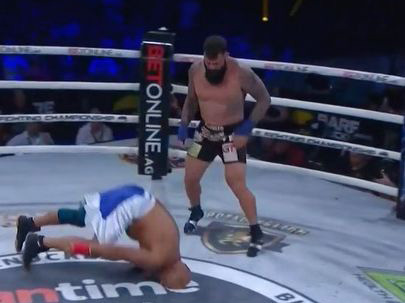 After missing out on an opportunity for a title eliminator at BKFC 17 against Josh Burns, Dillon Cleckler made his return to the ring on Friday (August 20) against Justin Thornton at BKFC 20 in Biloxi Mississippi.

Thornton was making his BKFC debut, while Cleckler came into the event as the fifth-ranked heavyweight in the promotion, behind Arnold Adams, Josh Burns, Sam Shewmaker, and champion Joey Beltran.

In the first, Thornton came out aggressively, bull rushing forward and swinging wildly with little to no technique.

Cleckler appeared content back up and allow Thornton to come forward, and potentially walk into a big, fight-ending right hand.

After getting caught on the ropes and spinning out to the centre of the ring, that’s exactly what happened, as Thornton rushed forward at Cleckler, who landed a short, right hand flush on Thornton’s jaw, and he was out before he hit the mat just 20 seconds into the opening round.

The referee waved it off immediately as Thornton hit the canvas, before calling in EMS, as he suspected Cleckler had broken Thornton’s jaw with the punch.

The win is Cleckler’s third in the promotion, he’s 3-0 and all three of his wins have come by way of knockout.

Considering Burns lost his last fight to Frank Tate—the fight Cleckler had to withdraw from due to injury—and Shewmaker lost his last bout in a title fight with current champion Beltran, Cleckler’s next fight should be a title-eliminator against Adams, with the winner taking on Beltran for the belt.