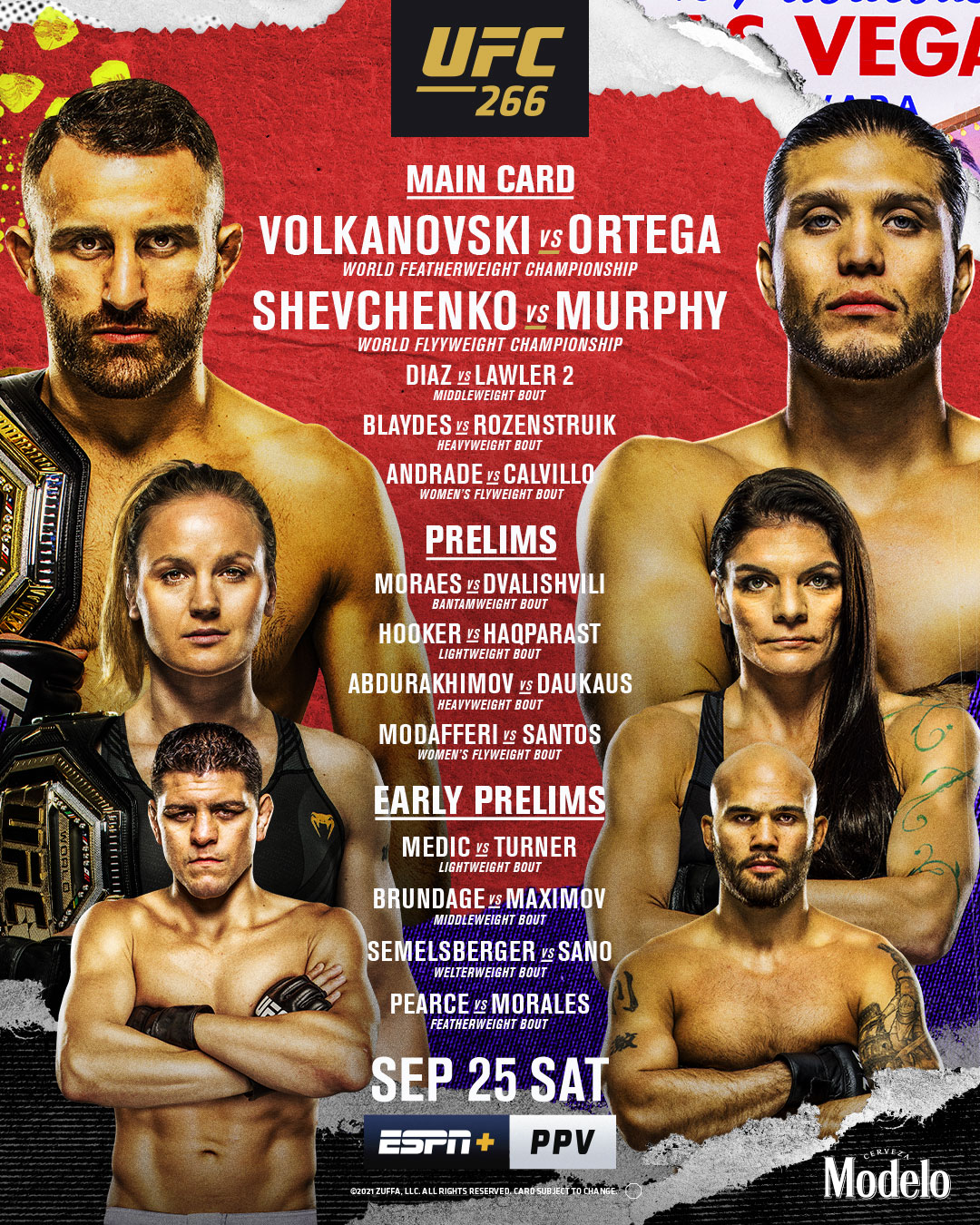 The UFC bring their 9th annual International Fight Week to Las Vegas, Nevada, and will cap it off with a stacked card at UFC 266, which features two title fights and a long-awaited rematch between two MMA legends.

Here is a breakdown of the three headliners.

After serving as coaches on season 29 of The Ultimate Fighter, UFC Featherweight champion Alex Volkanovski and Brian Ortega will finally get to settle the score inside the octagon. Volkanovski ended up getting all the bragging rights as the fighter competing in both the middleweight and bantamweight finals were members of his team, so he’ll be looking to continue that trend by successfully retaining his championship for the second time. ­­­

Volkanovski comes into this fight following back-to-back wins over Max Holloway; unanimous decision win to become the new UFC Featherweight champion at UFC 245 followed by a close split-decision win at UFC 251 to retain the title.

Ortega comes into this fight looking to take advantage of his second attempt at becoming UFC Featherweight champion. Ortega’s last title opportunity came at UFC 231, where he was defeated by then-champion Holloway.

The loss to Holloway was a learning experience for Ortega as it allowed him to assess what he needed to work on if he wanted to get another opportunity and he did just that. After being out of action for almost two years, Ortega returned to the octagon and defeated Chan Sung Jung by unanimous decision. It was a dominant performance by Ortega that earned him another shot at the UFC Featherweight championship.

Ortega will need to use his grappling if he wants to capture the championship this time around. That is easier said than done as Volkanovski has great takedown defense and the pace he is able to maintain for throughout the fight could be a problem for the challenger if the fight gets to the later rounds.

Valentina Shevchenko will be looking to continue her dominance in the UFC women’s flyweight division on Saturday night as she defends her title against Lauren Murphy,

Murphy, 38, is currently on a 5-fight win streak, which her longest win streak since beginning her MMA career at 8-0. Since moving down to flyweight in 2018, Murphy has had a lot of success; she has a 6-1 record and has wins over top contenders including Roxanne Modafferi and Joanne Calderwood. This career resurgence for Murphy is proves that she made the correct decision when she took a chance and moved down to flyweight in 2018.

Although Murphy’s resurgence has been a nice story, she stands across one of the most feared strikers in women’s MMA and is clearly the underdog. Shevchenko will be looking to successfully retain her title for the sixth time and further cement her legacy in the sport.

After 6 years away from the octagon, Nick Diaz will make his UFC return when he takes on former UFC Welterweight champion “Ruthless” Robbie Lawler in a middleweight bout. The fight had originally been scheduled to take place at welterweight however, it was changed to a middleweight bout earlier this week after Diaz requested it take place at 185lbs.

This fight between the two MMA legends is intriguing because it is 17 years after their first encounter. In the first fight, Diaz was the one who got his hand raised after putting on a striking clinic and caught Lawler off guard by trash talking him during almost every exchange. Both Diaz and Lawler go on to become champions; Diaz is a former StrikeForce Welterweight champion and Lawler is a former UFC Welterweight champion, and now meet again 17 years later.

It will be interesting to see if history repeats itself or whether Diaz’s inactivity will end up costing him in the rematch.