THE BEER MILE? YOU MAY WANT TO THINK TWICE 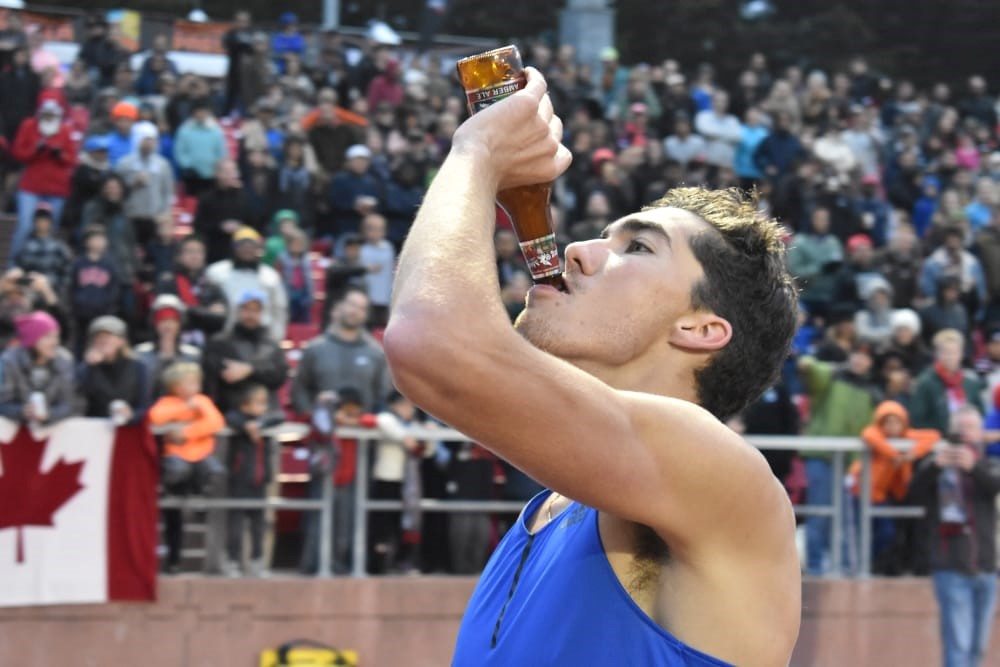 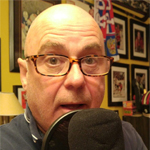 THE BEER MILE?  YOU MAY WANT TO THINK TWICE

If you are even a casual sports fan, you are aware of the biathlon. It's a very popular sport in Europe that involves cross-country skiing and target shooting. The skiing involves intense cardiovascular effort but that resulting stress can interfere with the calm focus that is necessary for the target shooting portion of the sport. Of course, ultimately, the winner is the competitor who completes the race in the shortest time.

I am a person who enjoys all the meats in the sporting stew and in my never ending pursuit of the unique, the odd, the offbeat or the somewhat strange bits, I discovered a story about a man who, in 2014, set a world record in a different type of two-element competition.

There is something called the Beer Mile and it involves running four laps around a standard track for a total of a mile and speed drinking four 355 ml (12 ounce) cans or bottles of beer. Yes, you read that correctly.  Now, I can hear certain people reading this now and they are saying “Ya!  Beer!  I’m totally down with that!”  But hold on a second before you make any snap judgements.

In the Beer Mile, the runner has to drink four beers and run a mile.  And there are penalties for any runner who throws up.  Now, I know several people who could tackle one part of those two elements but would be hard pressed to handle both within the same time window.

The current king of the Beer Mile is Corey Bellemore, a Canadian from Tecumseh, Ontario, outside of Windsor.  Bellemore first set the world record back in 2016 when he completed the feat in 4 minutes and 39 seconds.  That demolished the previous world mark of 4:47 which had been held by a fellow Canuck, Lewis Kent of Mississauga, Ontario.

A couple of days after that first world mark, Bellemore was competing at the Beer Mile World Classic in London, England and he knocked his record down to 4:34.35.  A year later, in 2017 in San Francisco, he ran – and drank – a 4:33.6.  And then, in October of 2021, in Manchester, England, Bellemore performed the first-ever sub-4:30 Beer Mile, completing the race in 4:28.1.  The record has belonged to Bellemore since he first captured the mark back in 2016.

While Kent was the world record holder, he cashed in on his success by appearing on Ellen and then writing a book on the subject called A World Champion's Guide to Running the Beer Mile in 2019.  Writing the book was not necessarily what Kent expected when he was first approached with taking on that task.

“I have so much respect for people who write books.  This is the single hardest thing I’ve done in my life.  When I committed to it, I thought I’d have a co-author, and then I realized I would be the sole writer.  I felt in over my head,” Kent told Canadian Running Magazine about his book in 2019.  “It’s about 60% my story and 40% tips and tricks.  It explains the basics of the Beer Mile and how to win a Beer Mile.”

While Kent may have tips and tricks that he used to achieve his success in the Beer Mile, Bellemore didn’t really subscribe to the same plan.  When Athletics Illustrated asked the king of the Beer Mile if he had done any specific training for securing his world record, Corey answered “Specific training?  None.  But I have been working very hard with my run training and also, doing a great deal of strength training in the gym.”

The fastest Beer Milers in the world run their laps in around 60 seconds, give or take a couple of ticks of the clock.  They drink their beers in anywhere from three to seven seconds.  They are not exactly savouring the flavour of the hops or the barley or anything else that might be in the can or the bottle.

Bellemore didn’t really commit to any kind of ‘specific’ training plan, but someone who did keep the science in mind was the man who, in 2014, finished the first sub-five-minute Beer Mile.  James Nielsen, of Novato, California, was 34-years-old when he finished the Beer Mile on April 27, 2014 in 4:57.1.  It was the first time anyone had ever completed the race in less than five minutes.

This was the beginning of the big Beer Mile boom in the running world.  Nielsen was an aesthete when it came to figuring out the ins and outs of the beer part of the race.  The running part was not a problem.  He had been a two-time NCAA champion in the 5,000 meters at the University of California San Diego.  In 2007, he won the Eugene (Oregon) Marathon.  In 2008, he qualified for the United States Olympic Trials.

He didn’t make the Olympic team that year and subsequently gave up competitive running.  In 2014, he began to hear and read about the Beer Mile and with the upcoming 60th anniversary of Roger Bannister’s sub-four-minute-mile, he wanted to do something to commemorate it.  He wanted to set a record in the Beer Mile.  He had to prepare and began to formulate a plan.  But Nielsen broke it down to a pretty exact science.  Carbonation was the key.

“There are 2.6 litres of carbon dioxide in one can of beer,” Nielsen told Runner’s World Magazine.  “You multiply that by four, you’re looking at about ten litres of gas in your stomach, which is completely unmanageable.  That’s why everyone starts to throw up or belch often, to get that gas out of there.  What you want to do is warm up the can of beer to get the gas on top of the liquid, so that when you open it, you release as much as you can.”

Nielsen used all of that information in his training.  And he did have a ‘specific training’ regimen.  He worked to slim down and decrease his upper body weight.  He worked to increase his interval training and his speed work.  He also worked on dealing with the carbonation.

If you’ve ever tried to mix beer in with your sporting or your physical endeavours, it can be really difficult if you aren’t prepared to deal with the carbon dioxide.  I can remember, many decades ago when playing in a mixed slo-pitch tournament in the mid 1980s, someone had the brilliant idea to pull out a funnel so people could ‘shotgun’ some beers.  I did one funnel and that beer went down fast but it felt like I was carrying a rock in my stomach the rest of that day.

Nielsen worked up to the Beer Mile gradually.  When he was training through the week, he would use soft drinks like cola to mimic the carbonation between his laps around the track.  On weekends, he would bring a couple of Budweisers to the track to bookend his laps.  Budweiser is the beverage of choice in the Beer Mile set, apparently, because they use less CO2 in their recipes than other brewers do.

The only time he ever did a full Beer Mile though was on the day he set the record.  And that did bring some complications for Nielsen.  “On the third lap, I hit a lower point.  My stomach was really starting to hurt and I’m thinking, ‘I’m going to run 5:05.  This is going to be so disappointing, but I’m out here doing it, so I may as well finish and see what happens’.  I heard my wife yell ‘3:54’ and I knew I had to drop a 65 (seconds) on the last lap, which I didn’t think I would be able to do.”

Halfway through his last lap, he gave himself the ultimatum.  “With 200 metres left in the race, I told myself, ‘If I go all out, I never have to do this again’.  I shifted into another gear and went for broke, and was thinking ‘please get under, please get under’.  I was so glad that I finished with room to spare.

Nielsen’s wife, Mimi, herself a three-time NCAA All-American runner herself, videotaped the run and got him as he finished the mile and he doubled over and strained to get out the words “That was really painful!”  She posted the video to YouTube.  It subsequently went viral with more than a million views very quickly.  That shocked James and Mimi.

“I definitely thought in the running community there would be a few thousand people who were interested and it would get some views and some talk,” Nielsen told Runner’s World.  “But I never, in a million years, thought it would be a million views in three days!”

Nielsen set the Beer Mile record a week and a half ahead of the 60th anniversary of Sir Roger Bannister’s sub-four-minute-mile at the 1954 British Empire Games.  They took place in Vancouver, British Columbia on May 6 of that year.  Bannister’s ‘Miracle Mile’ was the first time anyone had ever run that distance in a time under four minutes.  His time that day was 3:58.8.  His competitor that day, John Landy, ran it in 3:59.6.

James Nielsen’s name is now in the record books just like the giants who competed six decades before.

THE WINTER OF OUR DISCONSOLATION

THE LYNX THAT WE WILL GO TO

THE MEN WHO ‘STOLE’ MOGILNY

THE 1977 NHL DRAFT AND THE SPECTRE THAT WAS MIKE BOSSY

HOW THE FLYERS BECAME THE ‘BULLIES’

THE YEARS OF LIVING DANGEROUSLY – HOCKEY’S MOST HATED PLAYERS