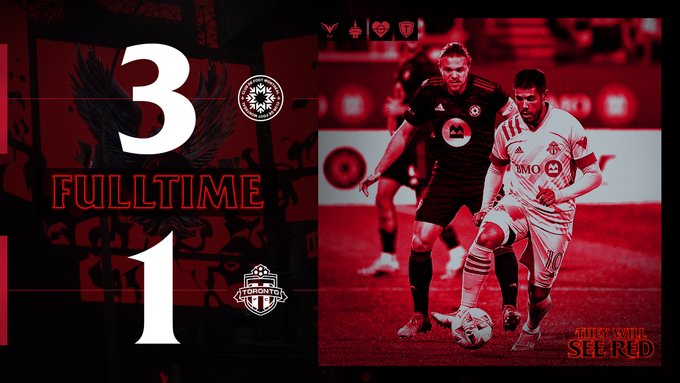 CF Montreal defeated their rivals Toronto FC in the 401 derby tonight and at the same time, put Toronto's playoff aspirations in doubt.

Toronto would immediately be at a disadvantage as they were forced to play with 10-men after Okello was shown a red card for a challenge in only the third minute of play. Okello was originally shown a yellow card for the challenge however, it was later upgraded to a red card following a VAR review.
The red card came at the worst possible time as the match had just begun and now Perez needed to alter his tactics and formation in order to ensure Toronto was not exposed on the back-end and that his attacking players were in a position to succeed on the counterattack.
Gonzalez committed a poorly timed challenge that gave Montreal a free-kick outside the box. Westberg made a huge save on the free-kick, but it was not enough as Samuel Piette was in the right place at the right time and struck the rebound in the back of the net to give Montreal the 1-0 lead.
Osorio subbed into the game for Laryea in the 30th minute. Perez had not been shy about making a bold change to his lineup in the past and tonight was no different. Perez subbed Laryea for Osorio and he was clearly not too pleased about it.
Toronto responded well in the second half and had a few promising moments in the attack that boosted their confidence. Toronto scored the equalizer in the 58th minute, when Soteldo found Achara with a nice cross pass, who put it in the back of the net.
It did not take too long for Montreal to respond. Jaquin Torres scored the go-ahead goal in the 68th minute when he received a cross from Brault-Guillard and struck it in the top corner, to regain the lead for Montreal.
Montreal would seal the victory over their rivals in the 75th minute, when Mihailovic sent a through ball to Romell Quioto, who struck the eventual game-winner past Westberg to make it 3-1 in favour of Montreal.
Toronto FC will have some time off to regroup during the international break and return to action on September 11th, when they take on FC Cincinnati.
Photo Credit: Toronto FC (@TorontoFC)