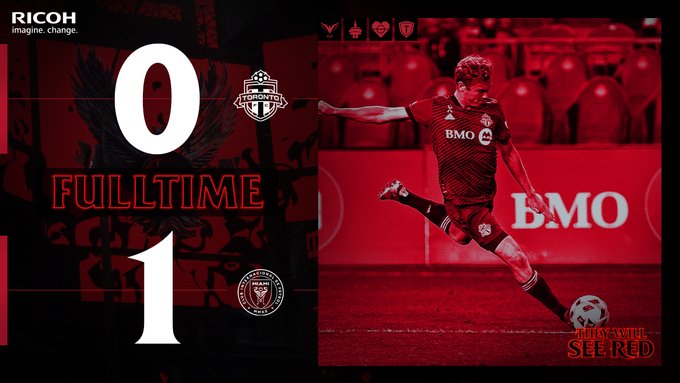 Christian Makoun was the hero for Inter Miami as they defeated Toronto FC in what ended up being a dramatic finish at BMO Field.
Toronto were looking to snap their five-match losing streak and get a positive performance that would hopefully boost their morale and confidence.

It was a much better effort by Toronto compared to effort in Saturday's defeat to FC Cincinnati; they controlled the majority of possession and maintained a consistent effort even when things did not go their way later in the match.
Endoh was forced to leave the match in the fifth minute due to an injury and was replaced by Jacob Shaffelburg. To make matters worse for Toronto, they would see themselves down to 10-men after Lawrence was sent off for his challenge in the 37th minute on .
Toronto's best opportunities came when the ball would be lobbed to Shaffelburg from the midfielders, but he could not strike the ball towards goal, which made Miami more of a threat on the counterattack. Toronto needed to be cautious while they were on the attack because Miami had strength in numbers with the extra man.
It was a dramatic conclusion to the match. Shaffelburg struck a shot on-goal that was stopped by Miami goalkeeper Nick Marsman, who had been in the net however, there was not a clear view as to whether the ball crossed the goal line when he made the save.
This was definitely a frustrating moment in the match because had there been goal line technology or a lengthy VAR review, it may have been determined that the ball crossed the line however, the officials could arrive at a definitive conclusion that the ball went in the net.
To make matters worse for Toronto, Mavinga would commit a foul in Toronto's 18-yard box, which resulted in a penalty being rewarded to Miami. Christian Makoun stepped up for his club and struck a Jorginho-esque penalty in the back of the net to seal the win and hand Toronto their sixth straight loss.
Toronto coach Javier Perez, who is usually fairly calm, was visibly upset during his post-match media availability when discussing what transpired in tonight's loss. "I'm not good tonight," said Perez. "We have all this technology, all these rules to get things right, and they just create more confusion. It's just unfair."
Photo Credit: Toronto FC (@TorontoFC)