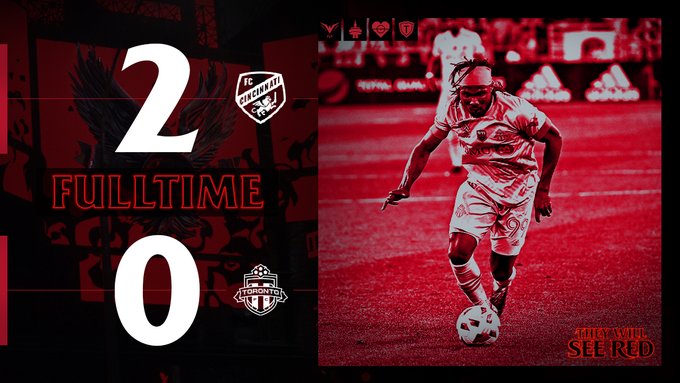 FC Cincinnati handed Toronto FC their fifth straight loss after cruising to a 2-0 victory at TQL Stadium.
It has been a difficult season for Toronto. Although the club has not yet been mathematically eliminated from a playoff spot, head coach Javier Perez had stated in his recent media availability that he is hopeful that the club will turn things around and that every match is a must-win.
Toronto FC head coach Javier Perez went with a 4-4-2 formation: Quentin Westberg in-goal; Auro Jr., Omar Gonzalez, Chris Mavinga, and Justin Morrow on the backline; Mark Delagdo, Infunanyachi Achara, Tsubasa Endoh, and captain Michael Bradley in midfield;and Patrick Mullins and Dom Dwyer as the strikers.
Toronto and Cincinnati were the bottom team clubs in the MLS Eastern conference standings coming into tonight's match however, Cincinnati were the side that played with a sense of urgency, while Toronto turned in another disappointing performance and lacked confidence for the most part.
Cincinnati got on the scoresheet in the 39th minute, when Brenner got a touch on Luciano Acosta's cross, to make it 1-0 in favour of the home side. There was miscommunication with Toronto's backline as it looked like Mavinga did not close in and do a good enough job marking Brenner, who had enough space to convert on Acosta's cross.
It looked like Toronto had found some life in the second half through the play of Achara off the wing. Achara was difficult to deal with when he had the ball on the wing as he quickly cut in and would create a scoring opportunity either for himself or his teammates.
Toronto's short burst of positive play would come to an end in the 58th minute, when Medunjanin struck the ball from outside Toronto's 18-yard box that took a deflection off Gonzalez and ended up past Westberg, who had no chance at stopping it.
Following the goal, Toronto looked like an already defeated side and would go on to lose their fifth straight match and at the same time, extended their winless streak to 8 matches.
Toronto are back in action on Tuesday, when they take on Inter Miami at BMO Field.
Photo Credit: Toronto FC (@TorontoFC)