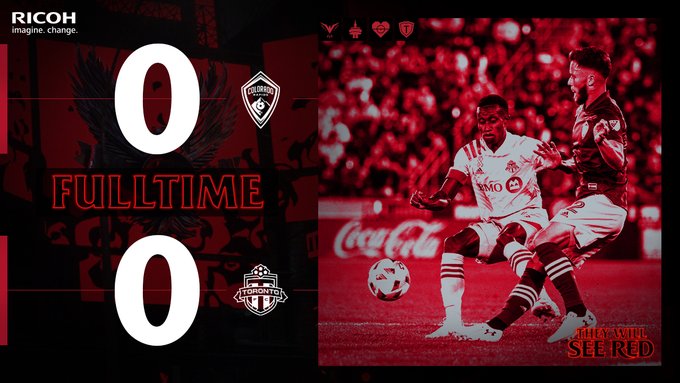 Toronto FC and Colorado Rapids played to a scoreless draw tonight in what was one of their best defensive performances of the season.

Toronto head coach Javier Perez gave some players an opportunity and important minutes against a Colorado side that is one of the top teams in the MLS Western conference.

Toronto came into this match following their dominant 4-0 victory over CPL-side York United FC in the Canadian Championship quarterfinals and Perez was hoping to carry over that performance against the Rapids.

It was not the same offensive display from Toronto that it was this past Wednesday night against York in the Canadian Championship. Instead, it was more of a stay at home defensive performance, where Toronto were looking to openings on the counterattack that they may be able to take advantage of.

Soteldo being in the attack was a success in that he drew fouls in key areas however, Toronto were unable to make the most of the opportunities from free kicks, leading to them having to settle for the one point on the road. Perez may choose to make more adjustments to his lineup as Toronto head towards the final stretch of the regular season that could see Soteldo return to his familiar position on the left wing and perhaps an opportunity for a young player like Jordan Perruzza to get important minutes as a starting striker.

During his post-match press conference, Perez mentioned that he was impressed with the team’s “energy and intensity” tonight. Perez then added that he has noticed that the mentality of the group has changed for the better. “This team is changing from being a number of individuals to being a team.”

Toronto FC will be looking to get out the last place when they take on FC Cincinnati this Wednesday. A win for Toronto on Wednesday will see them move past Cincinnati.