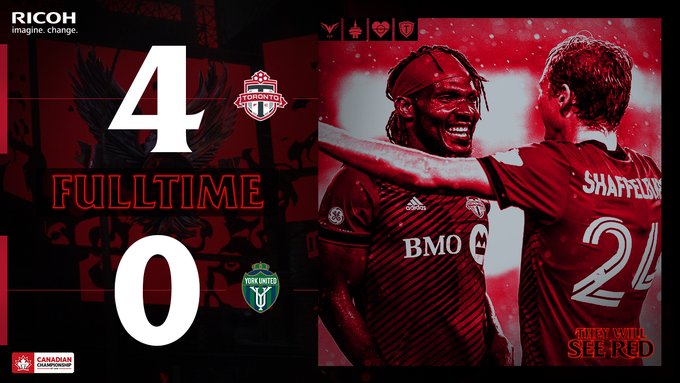 Noble Okello’s perfectly placed strike in the 89th minute sealed the victory for Toronto FC as they defeated their GTA counterparts York United FC, to advance to the semifinals of the Canadian Championship.

This was the first-ever meeting between the two GTA sides and was one the young York side could look back on as a valuable learning experience.

It was a homecoming of sorts for York head coach Jimmy Brennan, who was Toronto FC’s first-ever signing and captain in club history. Brennan had a great TFC tenure as a player and then on the sidelines when he joined the coaching staff following his retirement.

Coming into tonight’s Canadian Championship quarterfinal, Brennan noted that Toronto would be the team with all the pressure. “The pressure’s going to be all on TFC,” said Brennan, and added “They’re at home. They’re the big guys in the country.”

Toronto head coach Javier Perez echoed those same sentiments. During his media availability prior to tonight’s match with York, Perez stressed that he is taking this competition very seriously as it is important for the club and their only path to a CONCACAF Champions League berth. With Toronto being pretty much out of playoff contention, winning the Canadian Championship would be positive because it would provide the club with something to build on going forward.

Perez was a man of his word as he put out his best starting lineup that met the Canadian Championship’s roster requirements: Alex Bono started in-goal; Auro Jr., Chris Mavinga, Omar Gonzalez, and Richie Laryea on the backline; Mark Delgado, Jonathan Osorio, and captain Michael Bradley in midfield; and Ifununyachi Achara, Jacob Shaffelburg, and Yeferson Soteldo as the attackers up-top.

Toronto kept York on their heels early; they had gotten a few opportunities but couldn’t finish put the ball past Ingham, who’s saves kept York within reach for most of the match. York could find their rhythm offensively even with the dynamic trio of Petrasso-Gutierrez-Ferrari as their three attacking midfielders behind Wright.

Osorio got Toronto on the scoresheet in the 34th minute when he headed Shaffelburg’s cross behind Ingham. Shaffelburg wasn’t done as he would assist on another goal shortly after, when he crossed the ball to Achara, who struck it into the back of the net.

During his post-match press conference, Perez praised Shaffelburg for his performance tonight as well as his growth as a professional this season.

“I think he was a threat from the minute this game started,” Perez said. “I think he is becoming a really class player and I’m looking forward to seeing more of him in the next matches.”

Toronto was awarded a penalty in the 84th minute after Thompson brought Marshall-Rutty down in the box. Soteldo stepped up to the spot and converted a well struck penalty that got Ingham guessing wrong. The penalty put the game well out of reach for York, who would have needed 3 goals in 5 minutes.

Toronto wasn’t done there as substitute Okello would receive a through ball and calmly strike the ball past Ingham to seal the 4-0 victory for Toronto. With the win, Toronto advances to the semifinals where they will take on either Pacific FC or Cavalry FC.