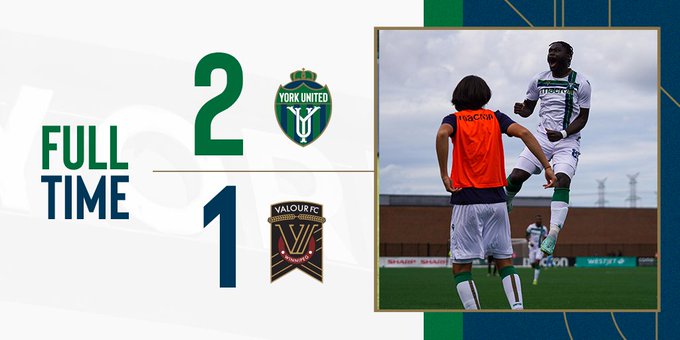 Lowell Wright's brace was the difference maker for York United FC as they came from behind to defeat Valour 2-1 and now move 4 points up on HFX and 6 points up on Valour in the CPL standings.

York United were looking to bounce back following their midweek loss to Toronto FC in the quarterfinals of the Canadian Championship. York came into this afternoon's match as the fourth seed in the standing and were looking to distance themselves from HFX, who sit at fifth spot and separated by one point. York were in for a tough test in their quest for a playoff berth as they took on Valour FC, who were looking to impress new head coach Phillip Dos Santos.

York were finding success with link-up play through their midfield but to Valour's credit, they did a great job breaking up their advancements with aggressive challenges that tested the referee's leniency. This was both effective and risky on Valour's part because although they found out what they could and could not get away with, they risked having a player be sent off if it started to get out of hand.

Valour defender Brett Levis talked about playing for new coach Phillip Dos Santos and how the familiarity of working with him in the past helped make the coaching change a smooth transition.

"I knew him and Marc's system quite well," Levis said. "Just having that last relationship from being there for a year and a half, I can help explain to certain players some situations that they may be confused about."

Rivero had a great goal scoring opportunity when he received the ball just outside the Valour box, but his powerful strike went over the bar. Moments later, Rivero would get another opportunity off a York corner kick that saw him strike the ball off the crossbar.

York had their best opportunity of the first half in the 24th minute when Rivero received a through ball and laid it off for Ferrari, who struck the ball wide of the net.

York's missed opportunity would come back to haunt them as Valour would get on the scoresheet in the 27th minute, when Brett Levis caught Ingham off surprise when he struck a shot that rolled gingerly into the back of the net to give the visitors the 1-0 lead.

Rivero was the story of the first half for York. The Spaniard could very well have had a hat-trick in the opening half; he did well and was able to get high quality scoring chances, but he either missed the net or was stopped by Valour goalkeeper Matt Silva, who came up big for his side and maintained the one-goal lead for his side.

York scored the equalizer in the 54th minute after some excellent ball movement that began on the left wing and saw Wright connect on Abzi's low cross, to tie the match up 1-1. Wright was not done there as the pressing of Petrasso and substitute Sebastian Gutierrez would lead to a turnover in the Valour box, resulting in Petrasso laying the ball off to Wright, who scored in the empty net and put York up 2-1.

Brennan mentioned that he has seen a noticeable improvement in Wright's hold-up play. "He's got such a big frame on him," Brennan said. "He's got good weight, good power, strength, and he's got to utilize that and understand how and when to use it. He's starting to really get it and grasp it."

There were frantic moments in the final minute of play when a rare error by Ingham led to panic inside the York box but fortunately for the York goalkeeper, he was able to recover and make the save.

York is back in action next Sunday, when they host HFX Wanderers at York Lions Stadium.