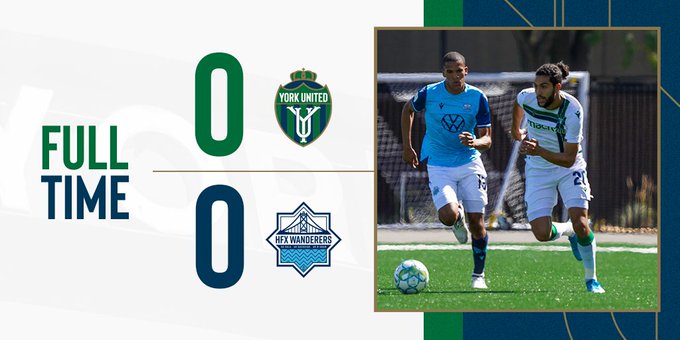 York United FC and HFX Wanderers played to a scoreless draw in what turned out to be a gritty affair at York Lions Stadium.

With York United FC having an important Canadian Championship matchup with Toronto FC this coming Wednesday, head coach Jimmy Brennan made a few changes to his starting lineup tonight: Nathan Ingham started in-goal; Diyaeddine Abzi, Dominick Zator, captain Roger Thompson, and Chrisnovic N'sa on the backline; Isaiah Johnston, Noah Verhoeven, Alvaro Rivero, Sebastian Gutierrez, and Max Ferrari in the midfield; and Julian Ulbricht as the striker.
The dynamic play of Gutierrez was on full display in the first half; he did a great job finding open space to create high quality scoring opportunities. Gutierrez's ability made him a focal point in York's counterattack as well as a threat to HFX's backline.
Gutierrez has been finding his form as of late and has been a welcome addition to Brennan's lineup. The 24-year old was signed during the offseason however, due to the pandemic, he was not able to join the club until last month after completing quarantine protocols.
Aside from a brief moment that resulted in Ingham being forced to make an excellent save in the 28th minute, York were quite comfortable for the most part. They did not deviate from their tactics and maintained their structure defensively.
Rivero was another player that stood out for York. The former Real Madrid academy player usually plays as a central attacking midfielder - just behind the strikers - but with the addition of Gutierrez, he has shifted to the left wing and has done a formidable job cutting into the middle for a shot on goal and linking up with Abzi on the left side. Rivero shifting to left wing provides coach Brennan with plenty of depth and possibilities with his tactics as Michael Petrasso and Ijah Halley in the attacking midfield positions as well.
York had an opportunity in the 38th minute, when Gutierrez struck a nicely placed shot that rang off the post and narrowly stayed out of the net.
Brennan made a change to start the second half by bringing on Lowell Wright in-place of Ulbricht. Wright had scored the winning goal in stoppage time when York and HFX played last month in Halifax, so it was safe to say Brennan was looking for history to repeat itself and see Wright get the team on the scoresheet. Michael Petrasso and Nicholas Hamilton were subbed into the match shortly after.
With Gutierrez on the bench, Petrasso slotted into that role of creating goal scoring opportunities for both himself and his teammates. Petrasso found Ferrari on a few occasions, but the two were unable to convert. On one occasion, Ferrari's struck a shot on goal that resulted in a rebound, but Petrasso could not get to the ball in time and collided with the goalkeeper.
Ingham continued to make crucial saves that capped off a fantastic performance on his part. Both teams had their moments towards the end of the match, but neither could score the game winner, so they would have to settle for one point each.
York United FC are back in action this Wednesday, when they travel to BMO Field to take on Toronto FC in the next round of the Canadian Championship.
Photo Credit: York United FC / David Chant