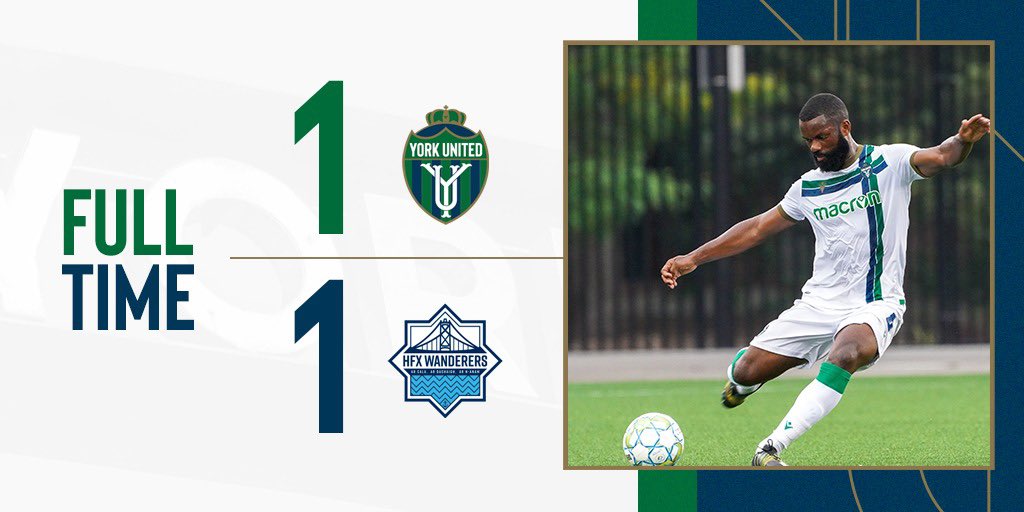 York United FC and HFX Wanderers played to a 1-1 draw tonight in what turned out to be a chippy affair at York Lions Stadium.

York coach Jimmy Brennan made a few changes to his lineup, which came into tonight's match following a dominannt 5-0 win this past weekend against Master’s FA: Niko Giantsopoulos starting in-goal; Diyaeddine Abzi, Jordan Wilson captain Dominick Zator, and Chrisnovic N'sa on the backline; Noah Verhoeven, Isaiah Johnston, Max Ferrari, and Alvaro Rivero in the midfield; and Osvaldo Ramirez and Michael Petrasso as the attackers.

York United did not waste any time getting on the scoresheet. York scored in the third minute after Ferrari, who received an excellent through ball from the midfield, struck the ball off the crossbar that led to Ramirez racing to the rebound and struck in the back of the net. This is a great sign for York United as Ramirez had scored in the team's 5-0 victory over Master's FA and again tonight, so it gives the more options in the attack.

HFX were not fazed after conceding the early goal. They regrouped and would go on to have the more ball possession for the better part of the half and tested York goalkeeper Giantsopoulos. The Wanderers were running a lot of their offense through Morey Doner off the wing and had some success getting the ball in the box and keeping York on their heels on the defensive end. Tonight's match was significant for Doner, who returned to York Lions Stadium for the first time as a member of the HFX Wanderers.

York's goalkeeper Giantsopoulos came up big for his squad in the 55th minute when stopped Wanderers forward Alex Marshall on the breakaway, which was a save that brought the supporters at York Lions Stadium to their feet. Marshall looked like he was in an offside position, but the flag stayed down and he had a clear goal scoring opportunity that he would likely want back.

The play began opening up as the Wanderers midfielders pushed further up the pitch in hopes of scoring the equalizing goal. Even though the Wanderers had strength in numbers with an all out attack style of play, they left themselves exposed on the defensive end at times. The high pressing attack paid off for the Wanderers as they would score the equalizing goal in the 79th minute, when substitute Sam Salter tapped the ball in the back of the net following a corner kick.

York had an opportunity to regain the lead in the 84th minute, when Lowell Wright linked up with Sebastian Gutierrez, who freed up space and got a shot off that ended up going wide of the goal. If Gutierrez had found the back of the net, it surely would have sealed three points for York United.

Eriks Santos was shown a straight red card in the 90th minute after a dangerous slide tackle on N'Sa. Gutierrez would have another opportunity at the end of stoppage time, however, he was unable to capitalize again and the final whistle sounded.

York United are back in action on Saturday, when they take on Forge FC.