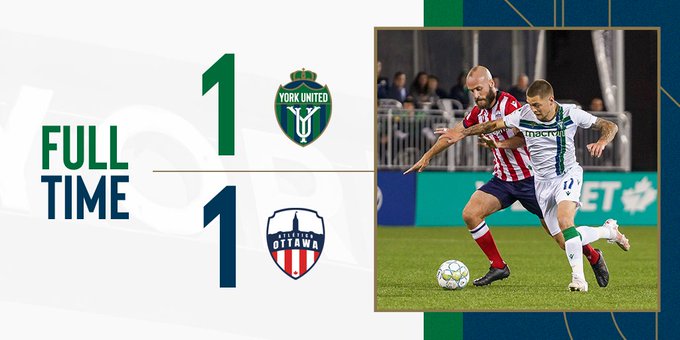 York United FC and Atletico Ottawa played to a 1-1 draw tonight in what ended up being a frantic final 10 minutes. WIth hte draw, York still hold on to the fourth and final playoff sport, but the pressure will now ramp up as they need to start 3 points in every match if they want to make the playoffs for the first time.

York United looked to maintain their lead in the CPL standings after this past weekend's draw with HFX, who trail them by one point. York head coach Jimmy Brennan made a few adjustments to his starting lineup but kept the 4-2-3-1 formation: Nathan Ingham in-goal; Jordan Wilson, Chrisnovic N'Sa, Diyaeddine Abzi, and captain Dominick Zator on the backline; Noah Verhoeven, Cedric Toussaint, Alvaro Rivero, Sebastian Gutierrez, and Michael Petrasso in the midfield; and Julian Ulbricht as the starting striker.
It was a positive start for York United. The attacking midfield trio of Petrasso-Gutierrez-Rivero found a few openings and tested Ottawa goalkeeper Dylon Powley early.
Turnovers were the story of the first 10 minutes of play. Ottawa's midfielders had some miscommunication that led to Gutierrez gaining possession and created a scoring chance. Ulbricht then received a pass from Abzi but was unable to finish as his shot was blocked. On the other end, Ottawa got a scoring opportunity of their own after a mistimed pass by Ingham that led to Ryan Telfer intercepting the ball and striking a shot that was stopped by Ingham.
Telfer had another opportunity moments later, but he was unable to put in the back of the net. It was an excellent performance for Telfer, who was active in all areas of the pitch and was a goal scoring threat off the counterattack.
York continued gaining momentum with their link-up play through their midfield, but were not able to get enough power on their shot which did not trouble Powley too much. Although York could not finish their chances, it was still a positive sign because they were not getting discouraged and continued to provide pressure on Ottawa's backline.
In the 47th minute, an excellent display of skill by Telfer saw him maneuver his way around two York players before being brought down in the box. As a result, Ottawa were awarded a penalty and Malcolm Shaw did not make any mistake. Shaw struck a nicely placed penalty that beat Ingham on the bottom-right corner to give his side the 1-0 lead.
York had a fantastic opportunity in the 77th minute when substitute Lowell Wright went around Ottawa captain Milovan Kapor found Petrasso with a low cross, but he could not get enough on the ball and Ottawa were able to breathe a sigh of relief as they cleared the ball out the box.
After chipping away all half, York would finally score the equalizer following a massive scramble in the box that ended with substitute Jordan Wilson heading the ball in the back of the net. The crowd at York Lions Stadium erupted and made for a wild ending to the match.
York are back in action this coming Thursday, when they travel to ATCO Field to take on Cavalry.