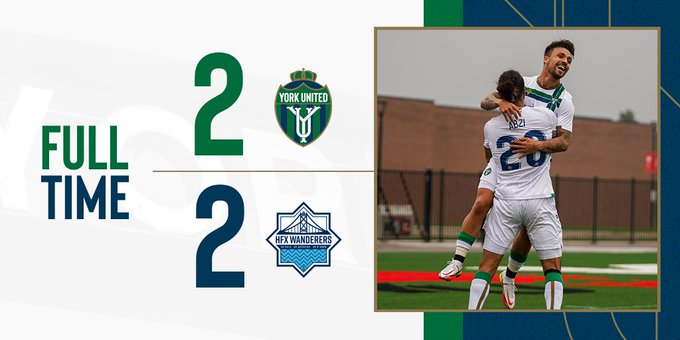 York United FC kept their place in the CPL standings after playing the HFX Wanderers to an entertaining 2-2 draw at York Lions Stadium. With the draw, York remain in 4th place with 30 points, while HFX remain in 5th place with 29 points. York would have benefited more with a win as they could have had a 4 point cushion heading into the final stretch of the regular season.

York and HFX exchanged scoring chances from their attacks off the wing in the first 10 minutes of play. After exchanging chances, York took over and began getting through the Wanderers' backline. The extra space allowed the attacking midfielder trio of Petrasso, Ferrari, and Rivero to link up and get crosses into the box.

After conceding an early goal, the Wanderers would respond through their counterattack. HFX wouldn't be playing from behind for long. Akeem Garcia who got a touch on a cross and put it past Ingham to even the score. It was a nice cross and finish that got the Wanderers right back into the match.

The Wanderers would add another goal to take the lead in the 41st minute off another cross that came from their counterattack. Camara would get a header on the ball to put his team up 2-1 heading into halftime. It was an eventful opening 45 minutes and York United would need to respond early if they wanted to get back into the match and secure another win at home.

Brennan subbed in Sebastian Gutierrez, Chrisnovic N'sa, and Cedric Toussaint in hopes they would provide a spark off the bench and that is exactly what they did. York's backline did an exceptional job breaking up plays in the second half, which kept the team within reach. The addition of Julian Ulbricht in-place of Wright added a different dynamic in their attack.

Petrasso did a great job weaving around the defender and cutting into the box but was unable to find the back of the net as his shot was blocked by Schaale. There were calls for a handball, but the referee did not agree which allowed HFX to get another opportunity off the counterattack.

York would score the equalizer in the 78th minute on a corner-kick that saw Petrasso cross the ball to the substitute, Ulbricht, who headed it into the back of the net. It looked as though York had regained the lead in the 82nd minute when Gutierrez headed Verhoeven's corner in the net, but the referee called a foul on Gutierrez for what was believed to be a push on Oxner.

During his post match press conferece, Brennan mentioned that he did not agree with the foul and felt Gutierrez should have been credited with the goal. Shortly after, York had another opportunity during a chaotic scramble in the box saw Ulbricht, Toussaint, and Petrasso each get a shot-on-goal, but each attempt was blocked.

York would need to settle with the draw and one point lead over HFX in a tight playoff race.

York United FC are back in action this Friday, when they host Atletico Ottawa at York Lions Stadium.