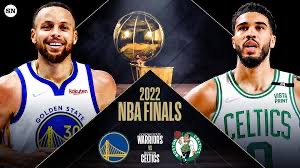 The Golden State Warriors reach one game closer to being NBA champions yet again after defeating the Boston Celtics 104-94 in Game 5. Coming off of arguably his best playoff performance in Game 4, Stephen Curry really struggled from the field but was lifted up by former number one overall pick, Andrew Wiggins.

This was a game of runs and the Warriors were the first time to jump out to the lead. After the first quarter of play, Golden State led 27-16 in dominating fashion. However, Boston wasn't going to go away easily.

The Celtics started the game awfully from beyond the arc, shooting 0-12 from three to start the game. Then what seemed like an instant, Boston made eight straight threes to take the lead from Golden State. Jayson Tatum was the main culprit of those makes, sparking him to a bounce-back performance.

Despite the loss, Tatum had arguably his best outing in these finals with 27 points and 10 rebounds. However, his counterpart on the other side, Andrew Wiggins, was the best player on the court.

The Canadian finished with 26 points and 13 rebounds, scoring the most points by a Canadian in a Finals game. Defensively he was locked in and responded on the other end with timely baskets. A big plus for the Warriors with Stephen Curry going 0-9 from three.

Usually, the team that wins the rebound battle, wins the game. That wasn't the case in Game 5 as the Celtics outrebounded the Warriors 47-39 and it still wasn't enough to overcome Golden State's stellar play.

The main difference is that the Warriors turned over Boston 18 times and only coughed up the ball seven times on their end. Creating more opportunities for the Dubs that they took advantage of.

With this win, the Warriors are just one win away from another championship but will have to do that in enemy territory. Boston will look to force a Game 7 on Thursday at 9 PM ET.