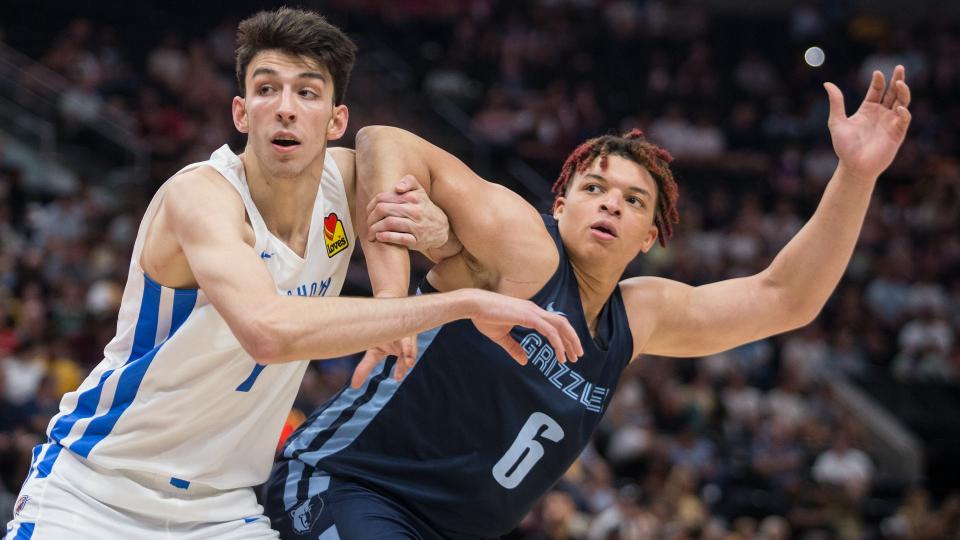 Has Chet Holmgren already given us a glimpse of what his NBA career will consist of?

With the offseason in its desert period, the basketball world has turned to the NBA Summer League to focus its attention. The Las Vegas Summer League has yet to start, however, Utah has started hosting its SLC Summer League games. With high anticipation since the number two overall pick in the 2022 NBA Draft, Chet Holmgren made his NBA debut.

The Oklahoma City Thunder squared off against the Utah Jazz and all the eyes were on the Thunder. OKC's summer league roster consists entirely of players who will be getting rotational minutes in the regular season due to their rebuilding youth movement. Regardless of all the young prospects they have, all the eyes were on Holmgren.

Many questions surrounded the 7-foot-1 center regarding his body, and if it can hold up in the NBA game. It didn't seem to be a problem en route to a stellar performance finishing with 23 points, seven rebounds, and a Summer League-record six blocks.

One of the most impressive aspects of his performance was how he was getting his points on offence. They were rarely from paint opportunities. Holmgren was making shots that proved why he was such a highly-coveted prospect. Fadeaway baseline jumpers, one-legged shots off-balance, at his size on the court it looked simply unbelievable. Doubters were silenced, but not for long.

Oklahoma City got ready for their next game which was against the Memphis Grizzlies, who featured the undrafted Kenny Lofton Jr. from Louisana Tech. This was an interesting matchup on paper due to the build of both players. Chet is a seven-footer at just 195 pounds, while Lofton Jr. is just 6-foot-7 but is 275 pounds. This would be Holmgren's first taste of a matchup against the big bodies in the NBA.

The success from his first game wasn't emulated in the slightest. Lofton Jr. bullied the young star on countless possessions. Holmgren looked helpless as he was backed down from near the three-point line on a few occasions. The former Gonzaga Bulldog was outplayed significantly, finishing with 11 points and 12 rebounds on a horrible 27 percent shooting from the field. While Lofton Jr. posted a stat line of 19 points and six rebounds on 47 percent shooting from the field.

Chet wasn't dominated in this matchup but he was undoubtedly outplayed. This was towards—albeit a great player in Kenny Lofton Jr.—an undrafted player. Going up against Joel Embiid, Nikola Jokic, Karl Anthony-Towns and the other premier big men in the NBA, his strength may be as concerning as people have sought it out to be.

The NBA hasn't necessarily witnessed a talent like Holmgren. He is still an excellent shot-blocker with a great second jump, and offensively he moves like a guard. He has shown that he will be successful in his rookie year but he will also be held back due to his physical limitations.

His floor and ceiling are incredibly high but will Holmgren be able to reach his full potential? Or will he become another NBA what if? Time will only tell but Chet Holmgren will be a special and unique player to watch for many years to come.