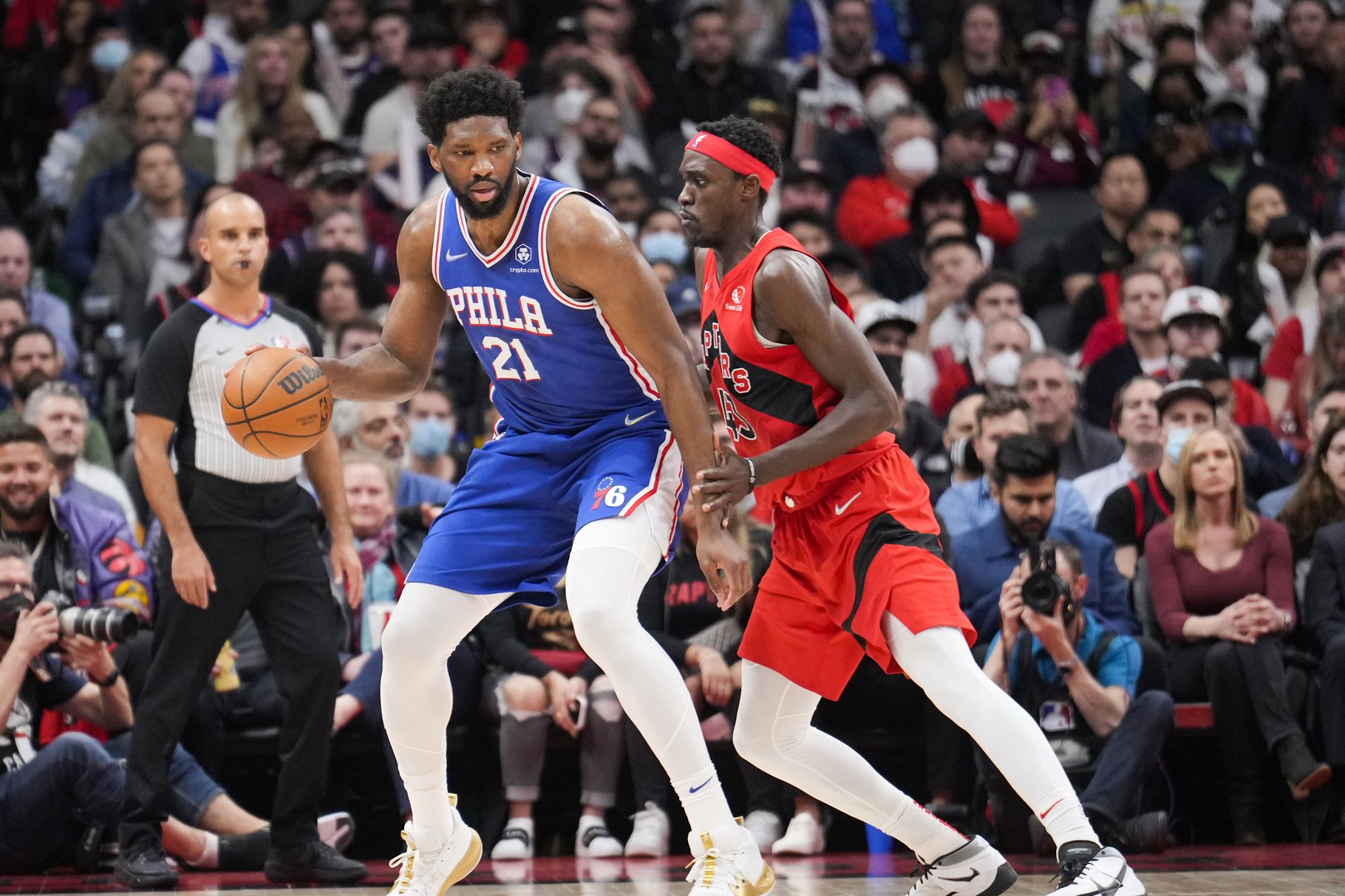 Diamonds are made under pressure, just how will these teams respond to the playoff tension this time around?

The NBA postseason is where stars are made. Legends are cemented forever in basketball lore. It is ultimately the most meaningful basketball anyone can play. For the Toronto Raptors and Philadelphia 76ers, playoff basketball is nothing new to both franchises.

They clashed recently in the 2019 eastern conference semifinals where a Kawhi Leonard buzzer-beater in game seven was the difference between the two teams. Looking back further in both teams’ playoff history, they met in the 2001 east semis. Vince Carter barely missed on a jumper that would’ve elevated the Raptors to their first Eastern conference finals.

It’s safe to say that these two teams have had the slimmest of margins to work with when playing each other in the playoffs, and it looks to be a similar story this time around as well.

The Raptors took the regular season series three-games-to-one, with both teams missing key players throughout the matchups.

Shaquille O’Neal famously (or infamously if you’re a Raptors fan) predicted the Sixers to sweep the series, but looking at it closer, there are a couple factors that could swing the series in favour of either team.

Which versions of Fred VanVleet and James Harden will we see?

The play of these star guards will be crucial for the upcoming matchup, as both VanVleet and Harden are the lead floor generals who run the offence and dictate the pace of play.

For the Raptors, VanVleet has been dealing with a knee injury since February. The injury has kept him out of the lineup in games post all-star break, and he hasn’t really looked like the player that earned his first all-star selection since then.

VanVleet’s injury has his movement seemingly limited on the court, and that could be a cause for concern for a Raptors team that really leans on his playmaking, shot-creation, and defence he provides. Regardless, VanVleet can be counted on to provide the intangibles that win basketball games, but his shooting in particular will be something to keep an eye on in this series.

For the Sixers, James Harden has the opportunity to be one of the best players in this series. His ability to take over a game with his scoring and playmaking, when at its peak is almost unmatched in the NBA.

He’s a former MVP for a reason, however so far in Harden’s career he’s shown a tendency to disappear in the biggest moments, particularly in the playoffs.

His playoff blunders in Houston are well documented, coming up short against the Golden State Warriors time and time again. He also struggled in last year’s postseason with the Brooklyn Nets, albeit he was dealing with injuries that limited his play.

In the lone game Harden played against Toronto this season while wearing a Sixer uniform, he scored 13 points on 3-for-12 shooting to go with 15 assists. For Philadelphia to win this series, Harden will have to perform at a higher level to help alleviate the scoring load from Joel Embiid, who will likely have his own hands full with the Raptor defence throwing everything they got at him.

How will coaching impact the series?

Like Harden, Sixers Head Coach Doc Rivers has had his own fair share of playoff failures that are well-documented. Rivers isn’t a bad coach, in fact he’s one of the most respected coaches in the league, and it should be noted that in the NBA it's often the coach that’s the first person held responsible for a team that fails to live up to expectations (look no further than how Frank Vogel was dismissed for a recent example).

But with all due respect, even with Rivers’ championship pedigree from his time in Boston, Nick Nurse is on a different level as tactician, especially in a playoff series.

Nurse isn’t afraid to experiment, and that willingness to manage a game with such detail and accuracy is just something that Rivers can’t match, or at least hasn’t proven to this point that he can match.

Look for Nurse to deploy the army of 6-foot-9 wings to cause havoc in both the passing lanes and on the glass, while also throwing the likes of Precious Achiuwa, Pascal Siakam, Thaddeus Young, and OG Anunoby to slow down the MVP-candidate Joel Embiid.

If the Raptors can successfully slow down Embiid, this may not be a close series after all, but realistically, the Raptors won’t be able to completely shut down Embiid.

How Rivers decides to manage the Embiid-less minutes on the floor will also be crucial, as the Raptors have attacked those minutes in every matchup, and they’ve won those minutes with the big man on the bench.

Keys to the series for both teams

For Toronto, winning the Embiid-less minutes and limiting Harden on offence while attacking him on defence will likely be the game-plan Nurse decides to go with, at least for the first couple games.

It makes sense to force the Sixer supporting cast to beat them as opposed to letting Harden and Embiid go off while also getting their teammates involved. You’re not gonna completely stop Embiid, and to an extent Harden, but limiting their looks at the free throw line, and throwing multiple defenders at them are all things the Raptor defence can do to throw off the Sixer star duo.

The Raptors will need to continue doing the things that made them great in the regular season, which is a relentless pursuit of the basketball both on offence and defence which gives them more opportunities to score the basketball.

Securing boards on the offensive and defensive end should be priority number one, followed by getting out and contesting Philadelphia's shooters.

For the Raptors to win this series, to sum it up, they have to make things ugly for the Sixers. They have to muck things up in the paint, make it a physical, gruelling series. And it goes without saying that the Raptors will need an excellent series from Siakam, and at least two other players offensively. Who will score when the Raptors go on droughts? That’s the biggest question mark facing Toronto going into this series.

For Philadelphia, they have to find a way to survive the minutes that Joel Embiid rests on the bench. Embiid, as great as he is, can’t play 48 minutes nightly in a series that could potentially go the distance.

It’s not a sustainable gameplan for the Sixers, especially given the expectations of being a finals team this year after going all-in on James Harden. If Embiid can ultimately play 48 minutes to win the series, you just have to tip your hat to him, but how much left will he have in the tank after advancing?

Whether it's staggering Harden and Embiid’s minutes or Tyrese Maxey and Tobias Harris stepping up, Philly will need to survive the Embiid-less minutes to win this series.

Shutting down Pascal Siakam is also a major priority for the Sixers, who won’t have their best wing-defender in Matisse Thybulle on road games in Toronto due to vaccine mandates which prohibit Thybulle from travelling back and forth the USA-Canada borders.

Siakam has been able to get whatever he wants against the 76er defence, and he punctuated that fact with his latest 37-point triple double against Philly in their April 7th matchup.

Four-Five matchups are always some of the harder series to predict in the playoffs as the differences between the teams are so slim. No one’s gonna be angry going with Philadelphia under the context that they have the definitive best-player in the series in Embiid, but to counter that thinking, it does take more than just one-player to win a playoff series.

I’m leaning towards the Raptors for a couple reasons. Nurse and the Raptors have shown in the past that they know how to slow down Embiid and Harden. Harden specifically doesn’t nearly have the type of spacing he had in Houston, and he’s been regulated to more of a playmaker and pick-and-roll partner for Embiid in Philly.

I’m more confident in Toronto’s ability to slow down Harden, and to a lesser extent Embiid, than Philadelphia’s ability to stop Siakam and the rest of the Raptors’ supporting cast.

With that being said, if Harden can play MVP-level basketball in this series, the Sixers could just run away with the series, and it’s going to be a point of emphasis for Toronto to prevent that version of Harden from materialising on the court.

This is going to be another close series between these two playoff rivals, and could really go either way given all the factors I’ve listed above. Expect multiple games being decided by five or less points, and at least one game to come close to, if not outright going to an overtime.

Counting on the guidance of Nick Nurse and the Raptors’ game plan and adaptability in a seven-game series, I’m taking the Raptors in six-games to advance to the east semis.