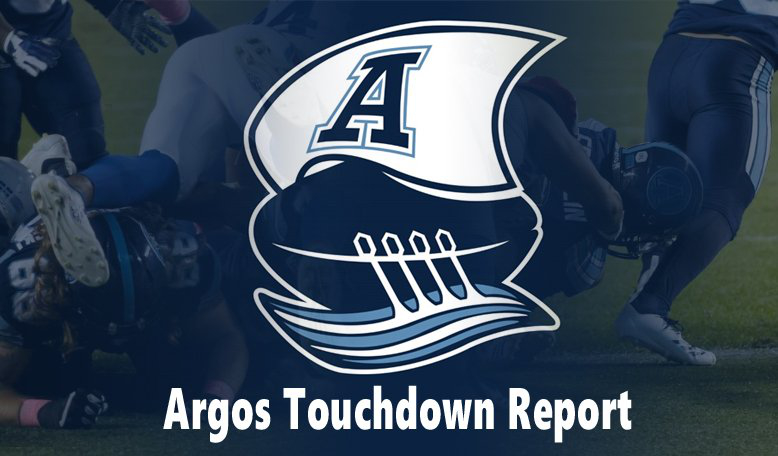 After two weeks of CFL action, the Argonauts are the sole owners of first place in the CFL East. There were valid concerns entering this week about whether the Argos could put up enough points to win given their reliance on Boris Bede field goals both last season and in this year's preseason. Though the Boatmen were still too reliant on points coming from the kicking game, they did manage to pull out the win.

All of the first half's scoring came courtesy of special teams kicks with Bede knocking through 17, 29, and 38-yard field goals for Toronto and Cote hitting 43 and 26-yard kicks for the Als. Adding two singles off of Haggerty punts gave Toronto a 15-6 lead entering the half.

Despite the relatively low scoring and lack of touchdowns, the first half didn't lack drama. Both McLeod Bethel-Thompson and Trevor Harris, who replaced starter Vernon Adams after the Alouettes' first three drives, tossed interceptions that looked like they could have been momentum sparkers for either side.

The biggest story of the first half though was Montreal linebacker Tre Watson apparently stomping on a Toronto player which led to a small brawl and both Watson and Toronto offensive lineman Dejon Allen being disqualified from the remainder of the game. It'll be worth watching to see if Watson, or Allen, receive a suspension from the league.

Whether it was halftime adjustments or just the season opener nerves settling down, the second half had just one drive, plus the final kneel down drive, that didn't result in points.

Toronto got the scoring started as McLeod Bethel-Thompson capped off a drive with a 15-yard touchdown to the newly acquired Brandon "Speedy" Banks. However, the most impressive play on the drive was actually the setup play. Bethel-Thompson took a big blindside hit as he threw a deep ball to Markeith Ambles for a 37-yard gain. Throughout much of the contest, Bethel-Thompson was willing to stand in the face of pressure and deliver accurate passes, which is a good sign for Toronto moving forward.

Montreal took advantage of this and drove down for a touchdown to bring the Alouettes within two points of the Boatmen at 20-18. Dominique Davis scored the touchdown on a one-yard QB sneak, but the drive was methodical and an impressive showing given the earlier portion of the game.

The Argonauts would have the only scoreless possession of the second half next, punting the ball away. Montreal would start their attempt at a comeback with 2:44 left on the clock lined up on their own 39.

After Trevor Harris completed a tough 3rd and 10 throw to Eugene Lewis, the Als stayed moving with a 21-yard pickup to Mayala before a couple of runs by Jeshrun Antwi setup the game's pivotal moment. Montreal called a timeout with 14 seconds left and David Cote lined up for the game-winning field goal attempt. As the ball left his foot, the crowd of 12,496 at BMO Field erupted in celebration. The kick was wide, resulting in a single, and led to the final score of 20-19.

Next week the Alouettes host the Roughriders on June 23 while the Argos make the trip out west to play the BC Lions on June 25.