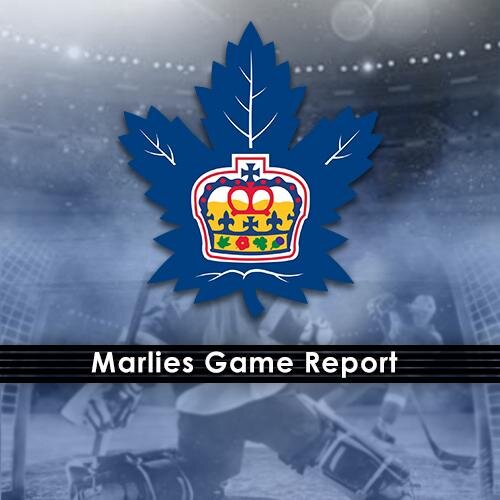 Logan Shaw put the Marlies on the board at 3:19 of the first period. He has recorded points (6-5-11) in five consecutive games.

Graham Slaggert scored at 4:21 of the third period. He has two goals in nine games this season.

Joey Anderson score the game-winning goal at 3:28 of overtime and earlier registered the secondary assist on Shaw’s first period goal. He has points (1-2-3) in consecutive games.

Mac Hollowell had the primary assist on Shaw’s first period. He has assists (3) in three consecutive games.

Noel Hoefenmayer picked up the secondary assist on Slaggert’s third period goal. He has 10 points (1 goal, 9 assists in 11 games this season with the Marlies, leading all Toronto defencemaen.

Alex Steeves had the primary assist on Anderson’s overtime goal. He has 14 points (5 goals, 9 assists) in 12 games this season.

Dryden McKay stopped 26 of 28 shots he faced. This was his first career AHL win.

This was Toronto’s fourth overtime game of the season (3-1).

Toronto has recorded a power play goal (17) in each of their first 12 games of the season. This set the all-time franchise record for consecutive games with a power play goal. The team’s power play is first overall in the league (30.9).

Toronto had a 35-28 edge in shots in all situations. Mac Hollowell led the Marlies with five shots on goal. Toronto is 5-1-1-0 when outshooting their opponent.

Really happy with it. Tonight was a very mature game. Great fans this weekend playing here in Grand Rapids and there were moments in the game where the crowd can make you feel like they a lot of momentum and have a lot of highs and lows but our team had a lot of confidence and sticking to our plan and the way we needed to play for 60 minutes.

Every game that he’s gotten into he’s gotten better and better. He’s earning our trust, he’s playing responsibly. He’s really fast. He puts a lot of pressure on the other team when they’ve got the puck and he get into open ice really good and get up ice and get some shots.

You could tell he looked more comfortable today. First game yesterday and to play back to back which is not easy at all for a goalie, he looked very comfortable and made some huge saves for us to keep us in it and give us a chance. Can’t say enough about someone

coming in and battling like that for our team.

I think we were great tonight. It was unfortunate that they scored at the end of regulation there but we played hard and we played to our system and our identity tonight. It was a really good, gutsy road win for us.

On his performance this season: