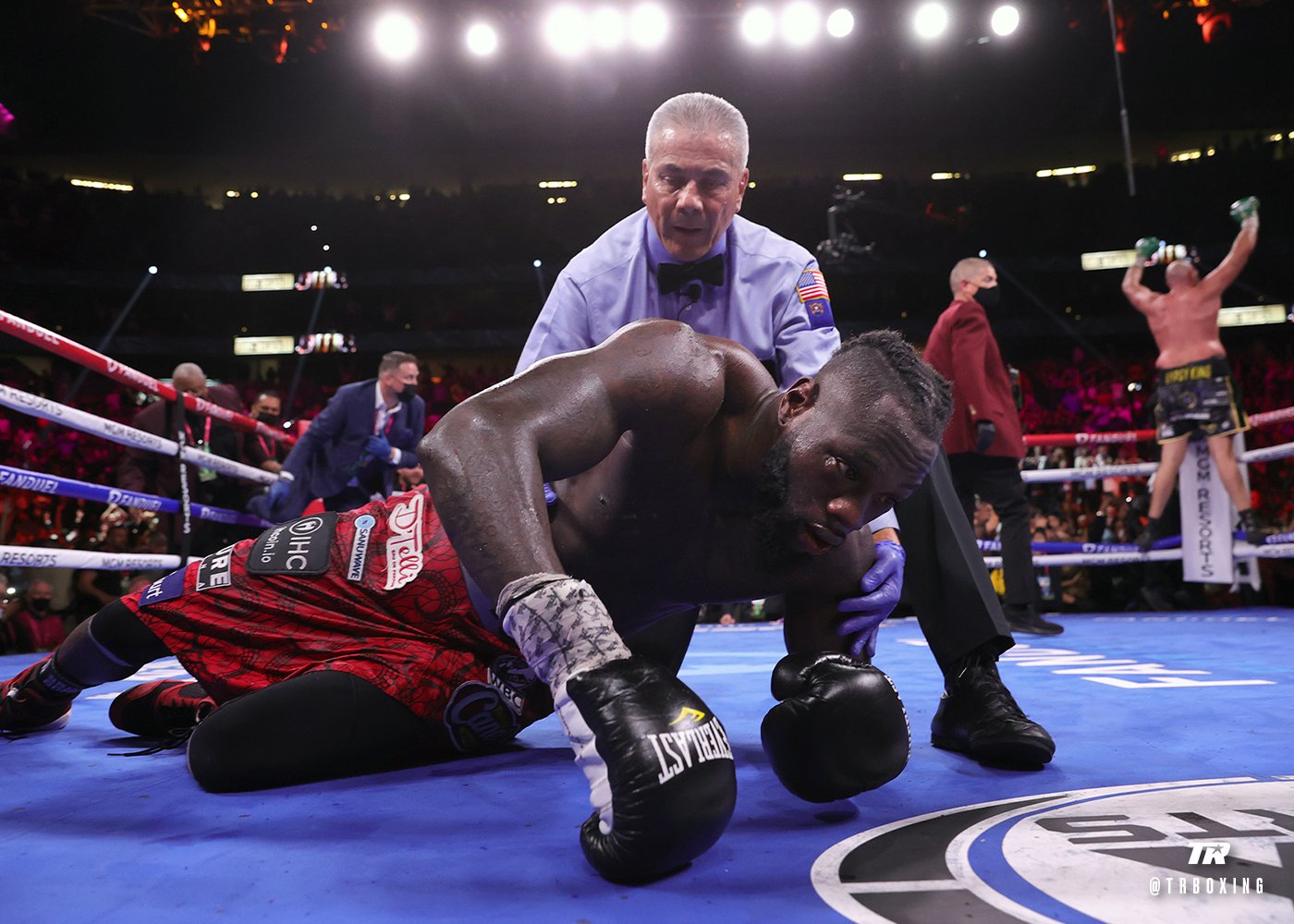 Tyson Fury beat Deontay Wilder in their trilogy fight on Saturday (October 9) and showed why he’s arguably the best heavyweight on the planet.

The fight, which was originally scheduled for July 24, was delayed for nearly three months after Fury tested positive for COVID-19.

After suffering the first loss of his career, Wilder appeared determined to get his belt back in the press conferences leading up to the fight, and he came out extremely aggressive in the first round, going to the body of Fury, rather than just headhunting.

After both men split the first two rounds, Fury hit Wilder with a right uppercut followed by a left hook late in the third round, sending the Bronze Bomber to the canvas for the third time in his career.

It appeared Fury was on his way to another quick victory, but Wilder showed incredible heart, beating the count and surviving the round.

In the fourth, Wilder appeared to be on shaky legs, but he landed a clean right hand that wobbled Fury, and he went down.

Knowing he likely needed to get the Gypsy King out of there to regain his belt, Wilder put his foot on the gas, pressing forward and throwing with reckless abandon.

Fury beat the 10-count, but he hadn’t fully recovered, and Wilder clipped him with a short right hand, sending him to the mat for the second time in the round—the first time he’s been dropped twice in the same round in his career.

Fury got up and survived, as both men swung for the fences, looking to get the finish.

Wilder, looked hurt for a significant chunk of the fight, as his legs seemed wobbly from the fifth round onwards.

However, he showed no quit, as he absorbed more than 100 shots from the lineal champ, and continued to try and answer back with punches of his own.

In the 10th, Fury slipped under a wild hook from Wilder and landed a thunderous right hand that put Wilder down for the second time in the fight.

It appeared the Alabama native wasn’t going to be able to beat the 10-count, but he did once again and made it out of the round.

However, in the 11th, as Wilder tried to tie Fury up, he got caught with another short right hand that sent him down for the third time, and referee Russell Mora immediately waved it off.

After the way Fury handled Wilder with ease in their second fight, many felt a trilogy was unnecessary and unwarranted.

However, it turned out to be easily the best fight of the year, and possibly of the decade, as both men were looking for the knockout with every swing.

There was some controversy in the fourth, as commentator Andre Ward suggested Mora was far too slow with his 10-count both times Fury went down. It was a sentiment echoed by many people watching and commenting on social media.

In the first fight, many thought Fury had benefitted from a long count when Wilder dropped him in the 12th round, and he appeared to be out cold, but then rose (as if from the dead) and even outboxed Wilder for the rest of the round.

After the fight, Fury said he felt the fight was worth the delay. “It was a great fight tonight, it was as worthy of any trilogy in the history of the sport,” he said in a post-fight interview.

“I’m not going to make any excuses. Wilder is a top fighter, and he gave me a real run for my money tonight,” Fury said. “I’ve always said I’m the best in the world and he’s the second-best.”

Wilder didn’t stick around after the fight was over, he left immediately for his dressing room and was later taken to a nearby hospital for precautionary measures.

Fury said during his interview that he attempted to show respect to Wilder after the fight, but it was not reciprocated. “I’m a sportsman. I went over to show love and respect, and he didn’t want to give it back.”

After the second fight, the first loss of his career, Wilder came up with all kinds of excuses for why he lost to Fury, rather than admit he got outboxed.

Immediately after the third fight, the heart and determination he showed appeared to win over many fans who had soured on him, but if he once again starts making excuses for losing, it won’t last long.

Fury now has to make a decision, as he was originally set to face Anthony Joshua, who held three of the four major belts at the time, in what would have been a huge payday for the Gypsy King.

That fight fell through, though, as Fury had not yet met his contractual obligation to provide Wilder with a rematch, and a judge ruled he would have to do so before he could fight anyone else.

Then, in September, Joshua lost to Oleksandr Usyk—the second loss of his career. The rematch clause has already been triggered, but if Joshua loses again (which isn’t unlikely based on how the first fight went), Fury may have to choose between fighting Usyk for the belts, or Joshua for the money.