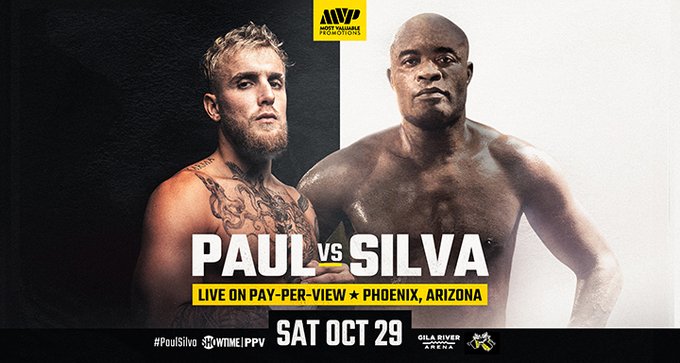 After months of speculation, the fight is finally official.

Jake Paul will return to the boxing ring for another clash with a former UFC champion. This time, he'll be standing across arguably one of the greatest MMA fighters of all-time when he takes on former UFC middleweight champion Anderson "The Spider" Silva on October 29th at the Gila River Arena in  Phoenix, Arizona, which is the former home arena of the Arizona Coyotes.

'The Spider" has received a lot of praise for his transition from the octagon to the ring, especially with how he performed in his split decision win against former WBC middleweight champion Julio Cesar Chavez Jr.

Silva then followed that up with a first round knockout win against former UFC light heavyweight champion Tito Ortiz.

The bout will be contested at 187lbs. Paul mentioned that accepting a bout with Silva was to silence his critics.

"Well, to all the non-believers, Jake Paul is fighting Anderson Silva," said Paul.

"I will walk humble into the ring, touch gloves with a living legend and do my best to exterminate 'The Spider'", Paul added.

It will be interesting to see what the two have planned in terms of a press tour, but the fight itself could answer a lot of questions.