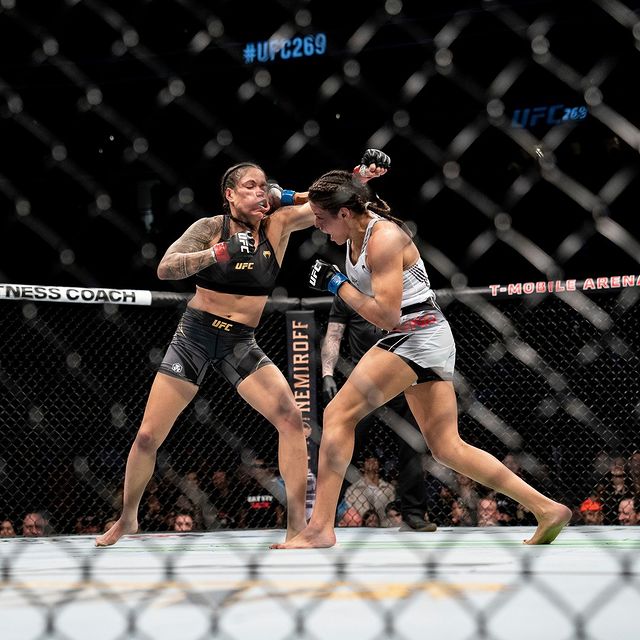 Julianna Pena shocked the world on Saturday (December 11) at UFC 269 at the T-Moble Arena in Las Vegas.

In the first round, Nunes showed why she was favoured, as she landed some crisp shots that stumbled Pena, knocking her down a couple of times before pouncing on her and trying to control the fight from the mat.

The second round was a firefight, as both women came out swinging, despite the fact Pena’s corner had suggested she keep the fight on the ground.

However, it was the challenger who was landing the better shots, as Pena used her reach and particularly her jab to weather Nunes, who absorbed several shots that clearly hurt her.

After softening Nunes on the feet, Pena took her to the mat and secured a rear-naked choke, forcing her to tap and claiming the bantamweight championship belt.

It was Nunes’ first loss in seven years—the last time she suffered defeat was in 2014 at UFC 178.

Pena, on the other hand, has now won three of her last four, dating back to 2019.

During the pre-fight press conference, Pena accused Nunes of ducking her, while Nunes dismissed Pena, claiming she wasn’t on the champ’s level skill-wise.

Pena claimed she would make Nunes eat her words when the fight was over, a promise she was able to make good on.

To her credit, Nunes took the loss in stride, crediting Pena for the win and vowing to continue to train in the hopes of reclaiming her recently-relinquished belt.

In the buildup to the fight, Pena said she would welcome an immediate rematch with Nunes if she won, and, given how long her reign as champ was, it’s very likely the UFC will run it back sooner rather than later.