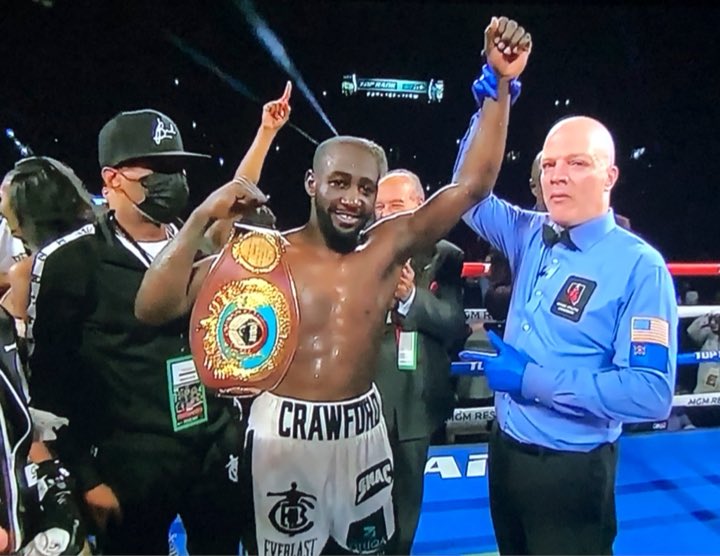 Terence ‘Bud’ Crawford did what no other fighter has been able to do: stop ‘Showtime’ Shawn Porter.

On Saturday night (November 20), Crawford took on Porter at the Mandalay Bay Resort and Casino in Las Vegas a fight widely billed as one of the best matchups of the year.

Crawford appeared content to ease into the fight, as he only threw 15 punches in the opening round, landing three of them.

Conversely, Porter’s game plan was apparent from the opening bell—get inside on Crawford and make him uncomfortable.

Through the first six rounds, it was incredibly close, as Porter was able to surprise Crawford with his speed, but the reigning WBO welterweight camp was able to open Porter up with his jab.

As the fight wore on Porter got more aggressive, lunging forward at Crawford, who at times looked like a matador, deftly stepping aside a charging bull.

Crawford’s sublime footwork allowed him to create angles and setup his power shots, which took their toll on Porter.

In the 10th round, Crawford was able to land a vicious uppercut that put Porter down for the first time in the fight.

Then, with just under two minutes still to go in the round, a flurry of hooks from Crawford dropped Porter for the second time.

Porter slammed the canvas in frustration, befor slowly getting to his feet to beat the count. While he appeared fine to continue—albeit slightly wobbly—his coach and father Kenny Porter had seen enough and threw in the towel.

When asked why he chose to stop the fight, Porter’s trainer Kenny said it was because of his son’s preparation, or lack thereof.

“He didn’t prepare like I wanted him to prepare,” Kenny said. “So that just makes me say I don’t want him in that situation.”

“He was at a deficit at that point, he couldn’t defend himself the way he should, and I had to protect him,” Kenny said.

With the win, Crawford became the first boxer to stop Porter, who has gone toe-to-toe with some of the best welterweights in the world, including Kell Brook, Errol Spence Jr., Keith Thurman, and Adrian Broner.

While many view Crawford as one of the best pound-for-pound fighters in the world (rightly so), the knock against him has frequently been his resume, which lacks victories over some of the bigger names in the sport.

However, after Saturday’s stoppage victory over Porter, a two-time world champion, there can be no argument that Crawford doesn’t belong in the conversation for the sport’s elite fighters.

During the post-fight press conference, Porter said he was calling it a career. “I was prepared to announce my retirement tonight, win, lose, or draw,” he told reporters. “So, I’m announcing my retirement right now.”

“After you’ve fought everybody at the top, what more do you do? I’m not going to be a gatekeeper,” he said.

With Crawford having taken care of Porter, he seemed disinterested when discussing finally facing Spence Jr. during the post-fight press conference.

"Like I said before, I don't need Spence Jr. I've been the number-one guy in the division since I came here," he said. "I won a title in my first fight in the welterweight division—the things I've been doing in my career don't compare to Spence Jr."

A fight between Crawford and Spence Jr. would be for the WBC, IBF, and WBO welterweight titles, and it's easily the most anticipated bout in all of boxing.