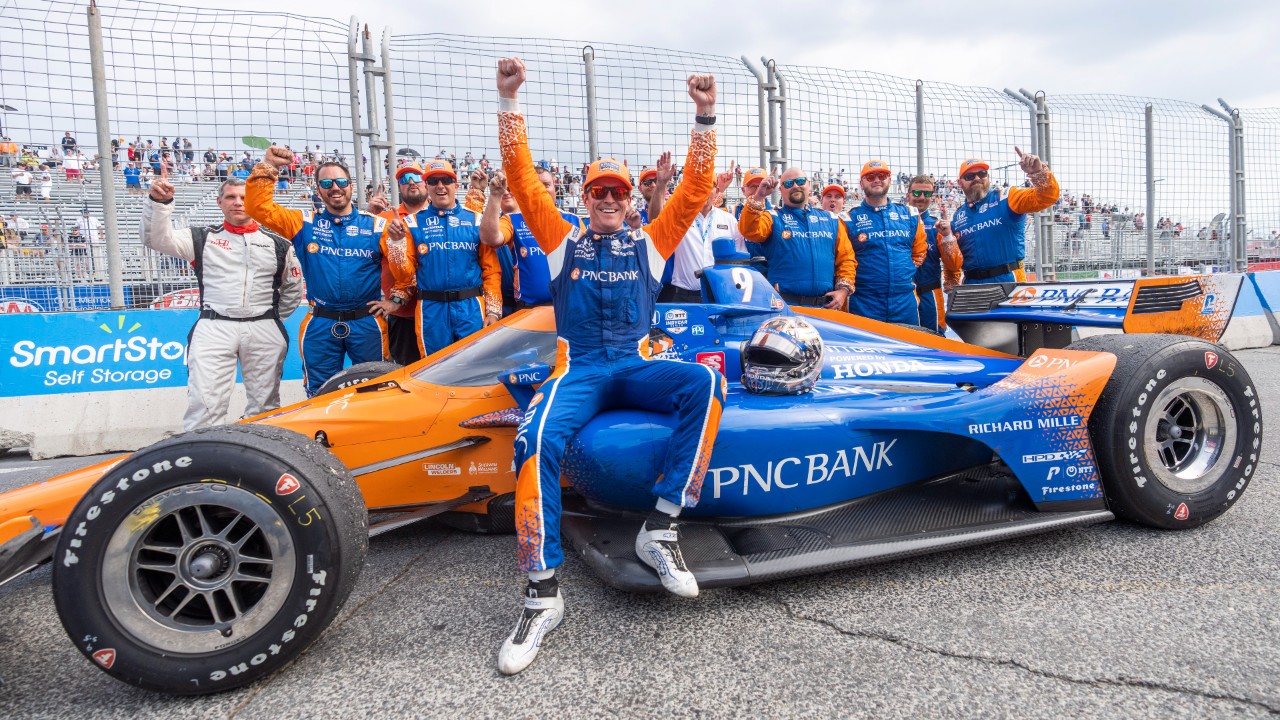 TORONTO–Despite the humidity in the air and sun that beat down on the lakeshore streets of Toronto, it was Scott Dixon who outshined the rest on Sunday afternoon.

The 41-year-old six-time series champion ended a 23-race winless drought in style for IndyCar’s return to Toronto after a two-year pandemic hiatus.

Starting on the front row alongside polesitter Colton Herta for the green flag, the Kiwi spent the opening stint chasing down the American, before some nifty strategics saw him box on Lap 17 in an attempt to undercut Herta. Andretti Autosport brought in Herta just a lap later to cover the move which would prove successful, before Dixon used his warm tires to pass Herta on the outlap while the 22-year-old was still dealing with cold rubber.

The move would prove decisive for Dixon who, despite having to deal with three separate cautions, was able to pull out a gap following every restart to keep Herta at bay.

With the victory Sunday afternoon, Dixon etched his name into yet another page of the IndyCar history books as the win was the 52nd of his career which sees him pull level with Mario Andretti for the second most in history. Still ahead is A.J. Foyt with 67 but Dixon is just honoured to be mentioned in the conversation with the likes of those two gentlemen.

“Ended a streak there, which is fantastic,” Dixon said. “Just so happy for the team. A crazy year for the 9. The PNC Bank No. 9 back in the winner's circle. It just feels so good.

“To be close to Mario, every time I’m asked these questions, I’m just so thankful that we still have A.J. and him in the pits. We get to see them; we get to talk to them. It’s just fantastic. It’s huge, man. I just feel so lucky to be a part of this group.”

Herta spent a large chunk of the final stint fighting for dear life to hold on to his P2 as the No. 7 Arrow McLaren SP of Felix Rosenqvist was closing in quickly through the dying laps. Herta seemed to be struggling mightily at the tail end of the race with the commentary crew speculating he was having to save fuel. I asked Colton after the race about the issue and it was a rather unconventional problem he actually found himself faced with.

“I couldn’t really see much because my balaclava broke near the end and all my hair went in front of my face. I could see Felix a bit and kind of judge the gap from there,” laughed the 22-year old. “I really couldn’t see, I had to look out the side of my visor rather than in front.

“It sounds like such a lame excuse and I really don’t like making excuses. Felix seemed to be quicker regardless and more on pace with Scott. We had a little bit more (tire) deg and I was struggling at the end. Happy with the result though and to right the wrongs from Mid-Ohio.”

Rosenqvist rounded out the top three with a brilliant performance amid a weekend with plenty of questions surrounding the McLaren driver lineup. When asked about whether he thinks his performance will have any effect on decisions within the team, his answer was short and sweet.

“I’ve made my point that I’m very happy with the team,” he continued. “We’ve worked hard the last two years to build a very strong team. Right now I’m just very happy where I’m at and it would be crazy for me to go somewhere else. Arrow McLaren SP is pretty much a home for me.”

Hometown hero Devlin DeFrancesco didn’t have the exact result he would have been seeking at his home race taking the chequered flag at P18, but the Canadian rookie maintained the gratitude he had for just having the opportunity to race here at all.

“I had a lot of support from the people here, the fans, my family and sponsors. I really just used that as extra motivation to do well. We’ve just been making progress each weekend. In the race, we hurt the rear tires too early and struggled with balance, but it seemed to get better as the race went on, unfortunately we were already on the backfoot.

“Hugely grateful for all the support though regardless.”

The 22-year-old donned a special edition racing suit for the weekend with a large dedication to the local Sunnybrook hospital here in the city - a place DeFrancesco is quite familiar with. Born 15 weeks premature, he weighed just one pound and his eyes were fused shut. Doctors gave him little to no chance of survival as his family brought in a Priest to give him his final rites. But he defied the odds with the help of the Sunnybrook Medical Centre as he was nursed to health, being able to stand where he was today.

The Series heads back to the oval circuits as they go to Iowa now for the Hy-Vee INDYCAR Race Weekend beginning Friday. Marcus Ericsson still sits atop the championship standings with a P5 finish here in Toronto as Dixon now finds himself in the title fight sitting fifth in the standings.