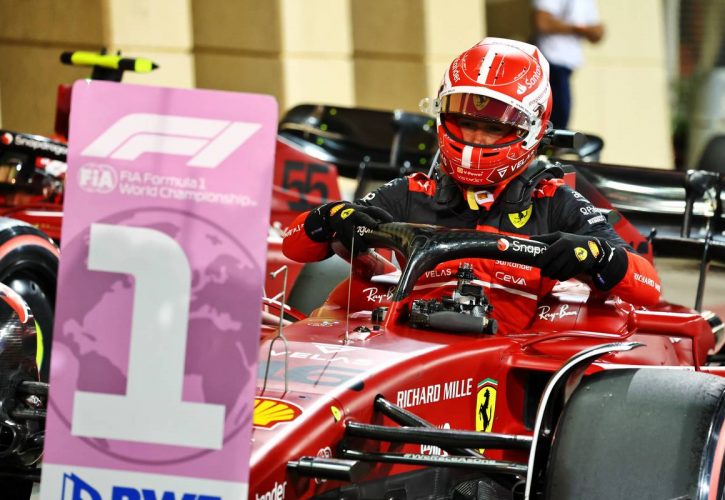 Charles Leclerc delivered a rapid 1.30.558s in the dying seconds of Q3 to snatch the first pole of Formula One 2022

Formula One is back, and this was put on display for everyone to see with a fantastic final Q3 shootout in the first qualifying session of the 2022 season.

Charles Leclerc took the 10th pole position of his career (second in Bahrain) with a blistering 1.30.558s as time in Q3 wound down. Leclerc had set the benchmark in Q1, before Verstappen hit back, pulling some pace out to finish on top in Q2. Verstappen was only able to find a little bit of time in his final run though, which saw him finish just over a tenth behind the Monegasque when it mattered. Leclerc's Ferrari teammate Carlos Sainz struggled throughout the weekend sitting 3-5 tenths behind Leclerc through the earlier sessions, but turned it on for qualifying, managing to round off the top three just 0.007s behind the Red Bull of Verstappen.

Further down the order in fourth was Verstappen’s teammate Sergio Perez who snuck his way in just over two tenths back from Sainz. Mercedes though, struggled throughout proving to everyone they may not have been sandbagging after all. Lewis Hamilton and George Russell finished 5th and 9th respectively, with the Silver Arrows off the pace by an average of half a second.

One of the leading stories from the night though is Kevin Magnussen. The Danish driver returning to F1 on very short notice, extracting everything from his Haas VF-22 to finish 7th, his best result in qualifying since the 2019 Austrian Grand Prix. Mick Schumacher put the other Haas in 12th confirming the suspicions many had headed into the opening race weekend; Haas do indeed have pace.

Valteri Bottas will be satisfied with his debut qualifying performance in an Alfa Romeo as the Finn out-qualified his replacement in George Russell, to finish an astonishing 6th. His rookie teammate Zhou Guanyu capped off what can be a successful debut qualifying with a 15th place finish, making it to Q2 in his first session.

Fernando Alonso will start 8th tomorrow as teammate Esteban Ocon will be a bit further back in 11th. Pierre Gasly rounded out the top ten in his Alpha Tauri, faring much better than sophomore teammate Yuki Tsunoda, who was booted out in Q1 with a P16 finish.

Many were left scratching their heads as McLaren’s Daniel Ricciardo and Lando Norris will start tomorrow 18th and 13th respectively. McLaren showed up to the Barcelona shakedown with some serious pace, which seems to have vanished since arriving in Bahrain.

Lights out for the first race of the season will go tomorrow at 11:00am EST.