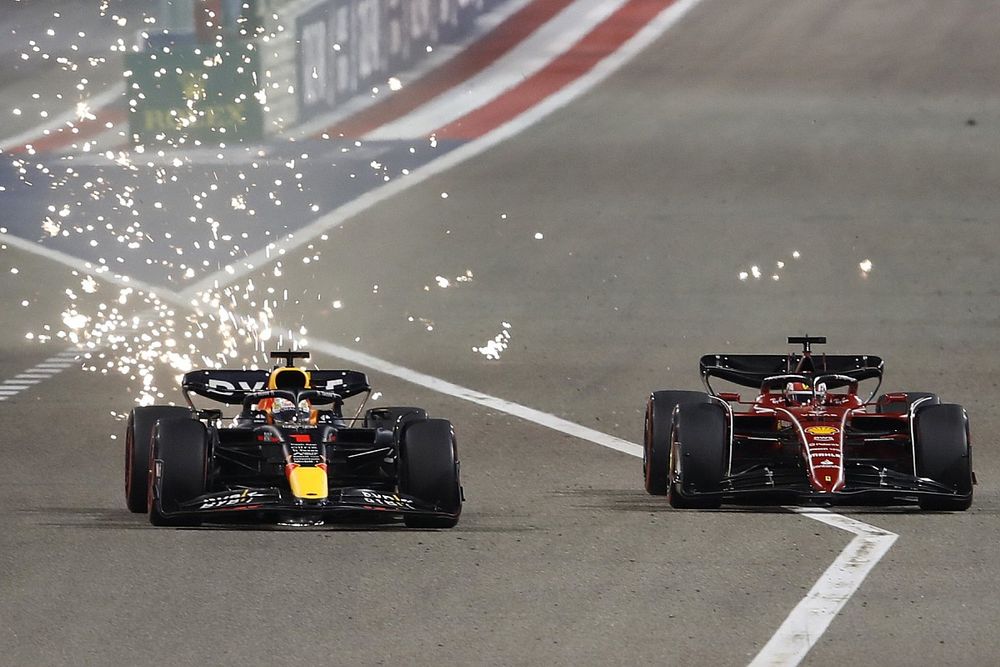 Following Sunday’s Formula One season opener, the Bahrain Grand Prix, the suspicion of many that Ferrari is back, and poised to make a title fight, has been confirmed. The Scuderia took a commanding 1-2 win with Charles Leclerc as Ferrari now lead both the drivers’ and constructors’ championships for the first time in almost four years, with many fans licking their lips at the idea of a Max Verstappen and Charles Leclerc title fight.

Coming into the season having just secured his first-ever drivers’ championship in 2021 following the controversial ending to the Abu Dhabi Grand Prix, it’s no surprise that Verstappen is the odds-on favourite to secure a second title. But to me, there is no doubt that Charles Leclerc is just as good, if not better, than his Dutch counterpart, and is set to take the fight to him this year.

Both Leclerc and Verstappen have had similar paths to Formula One, being highly touted young drivers who saw success throughout their junior careers. Verstappen was brought into Red Bull’s junior team in 2015 before being thrust into the main team in 2016. He won on his debut becoming the youngest ever grand prix winner in history. Leclerc won the Formula 2 championship in his rookie season in 2017 becoming the youngest and just the fourth driver to do so (previously Lewis Hamilton, Nico Rosberg, and Nico Hulkenberg), before debuting in Formula 1 with Ferrari’s junior team, Alfa Romeo Sauber. Like Verstappen, Leclerc was promoted to the big team in just his second year where he took two grand prix victories as well as five pole positions for the Prancing Horses.

Over the last couple of years, Ferrari had taken a step backwards with regards to their development, producing a dud in what was the SF-1000 in 2020. They turned back in the right direction for the 2021 season becoming more competitive but were still on the backfoot in comparison to Red Bull and Mercedes. For this reason, direct comparisons are tough to make, so we’ll start with 2019, the only year thus far the two drivers were able to compete in relatively equal machinery.

Leclerc joined 4-time champion Sebastian Vettel at Ferrari for 2019, and to the surprise of many, seemed immediately on the pace, out-qualifying Vettel and taking pole position for the 2019 Bahrain Grand Prix, just his second race with the team. Leclerc impressed mightily after not putting a foot wrong all weekend before heartbreak came in the form of an engine problem that hindered performance late in the race. He forfeited the lead to Mercedes’ Lewis Hamilton, before being passed by Hamilton’s teammate Valteri Bottas shortly thereafter, as what should’ve been his debut victory, turned into a maiden podium with a third-place finish.

Verstappen took three victories to Leclerc’s two over the course of the season, with Leclerc besting Verstappen in Qualifying taking five pole positions to the Dutchman’s two. In two cars that were fairly evenly matched, the Monegasque finished in fourth, behind third-placed Verstappen, just a mere 14 points behind. It is important to keep in mind that despite the two drivers being just one month apart in age, 2019 was Verstappen’s fifth full season in Formula One, and his fourth with a team capable of fighting for wins regularly. For Leclerc, it was just his second, and first with a competitive car.

Leclerc undeniably showed signs of his inexperience a couple of times throughout the year, like his lack of willingness to be more aggressive in his battle with Verstappen at the Austrian Grand Prix which ended up costing him the victory late. Baku can also be referenced, as Leclerc entered qualifying as the favourite for pole, before putting it in the wall in the tricky castle section.

Despite the last two years being tough ones for Ferrari, Leclerc continued to overachieve. 2020 saw him obliterate Sebastian Vettel in their last year as teammates with Leclerc managing two podiums to Vettel’s lone third place in Turkey, as well as 10 points finishes to Vettel’s seven. Leclerc would finish eighth in the standings with 98 points, whereas Vettel would finish in 13th, with just 33.

Over the course of 2020 and 2021, Leclerc continued to show flashes of brilliance as his racecraft matured through the two years he was in a car incapable of fighting at the front. But according to F1 Managing Director Ross Brawn, these performances from Leclerc in an uncompetitive car, are extremely valuable for when he eventually would find himself capable of fighting at the front again. Brawn even went as far as to compare Leclerc to the likes of Hamilton and Michael Schumacher, arguably the two greatest drivers Formula One has ever seen.

On Sunday, we finally saw them go wheel-to-wheel again with Leclerc proving just how far he has come behind the wheel. Leading early on, Leclerc knew Verstappen was gaining on him as he was within striking distance to start lap 17. Verstappen quickly closed the gap down the pit straight using DRS and slipstream to dive down the inside of turn one. Leclerc, who stayed in seventh gear down the straight, seemingly didn’t battle back too much, instead opting for the wider line, which he used to get a better drive into the straight run down to turn four. He retook the lead just before the corner with the exact same scenario playing out for 2 more laps before a big lockup from Verstappen gave the lasting advantage to the Ferrari driver.

The gap was closed late due to the safety car following Pierre Gasly’s fiery failure, with Verstappen at this point beginning to suffer some steering problems. Issues aside, Verstappen is known for applying the pressure on the restart, with his eagerness coming back to bite him this time. Leclerc waited until Verstappen was almost alongside him on the inside line, as Leclerc kept his car as wide as possible, then pinned it full throttle knowing Max would not be able to do the same due to his tight angle into the turn. This caught Verstappen by surprise as the Dutchman's Red Bull was already over a second and a half behind after just a few corners.

I know we’re just one race in, and Ferrari is known for blundering strategies as the season progresses, but what we saw from the Prancing Horses on Sunday felt different, and Charles Leclerc looks as good as any, for a chance at tasting championship glory this season.