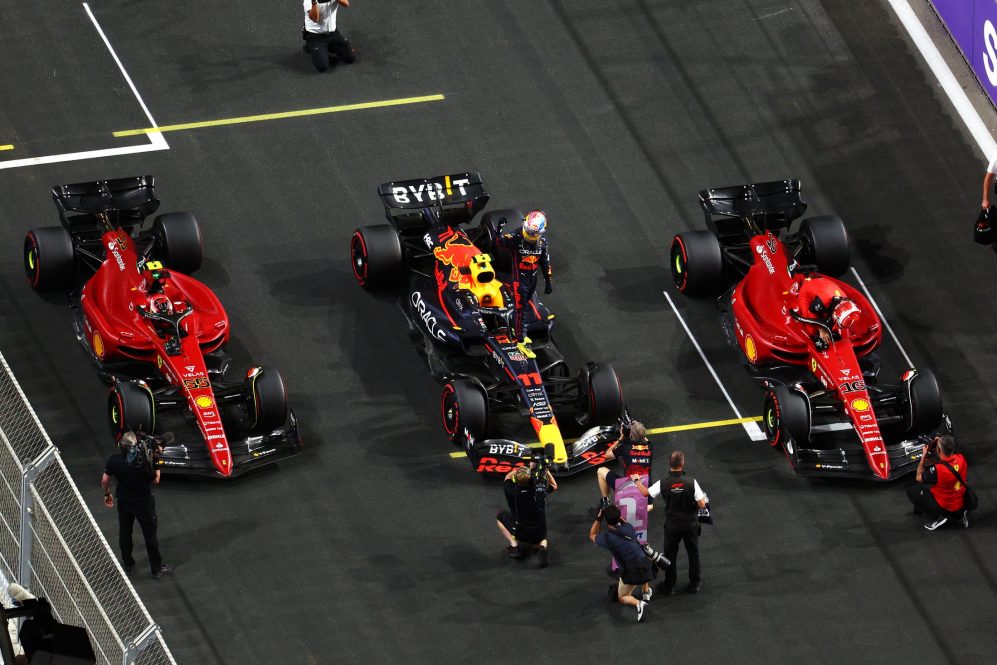 Sergio Perez grabbed his first career pole position with a 1.28.200s in the dying seconds of Q3, giving Red Bull. their first pole of the 2022 season.

With the checkered flag waving for Q3, Ferrari’s Charles Leclerc was on an absolute flier as he was best through the first two sectors, seemingly locking up pole position for the Prancing Horses. He crossed the line going fastest to pip teammate Carlos Sainz’s earlier time to put himself on provisional pole and put the Scuderia in line for the front row lockout. Max Verstappen on the other hand was no threat to pole, the Dutchman struggling with grip through most of the Q3 session. But Perez had put in a scorcher for his first run to be sat third, just behind the Ferraris.

Despite his pace, many were pleasantly surprised to see Perez improve on Leclerc in the middle sector, before crossing the line quickest, securing his first pole in 215 race starts by just 0.025s.

It was an exciting ending to what had been a very tough qualifying session delayed by over an hour in Q2, after a violent high-speed accident for the Haas of Mick Schumacher. Schumacher caught a bit too much curb on a flying lap, spinning around and into the barrier. He was extracted from the car in his race seat and cleared of any serious medical issues, before being sent to a local hospital for some precautionary checks. The German will not race in tomorrow's grand prix as Haas will only be running the lone car of Magnussen as put forth by an official statement from the team.

It was a qualifying to forget for Lewis Hamilton, as the Brit was knocked out in Q1 on pure pace. Hamilton was vocally uncomfortable with the car through the session, before only being able to manage a 16th place grid slot. The Silver Arrows will take some solace knowing that George Russell fared better, as the 24-year-old was able to manage sixth in a Mercedes car that appears to have some fundamental flaws.

Alpine’s Fernando Alonso and Alfa Romeo’s Valteri Bottas share the fourth row ahead of Kevin Magnussen and Pierre Gasly in the Haas and Alpha Tauri respectively.

it was another tough session for McLaren - albeit better than a week ago - as the Woking outfit was handed a double knockout in Q2. Daniel Ricciardo and Lando Norris will start alongside each other tomorrow in 11th and 12th.

Lights go out tomorrow for the Saudi Arabian Grand Prix at 1pm EST.

(Featured image by Formula One)