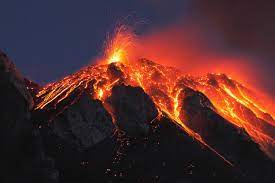 Volcanoes have been quiet for quite some time, but as the decades go by there have been eruptions and destruction. Now for anyone who is wondering what a volcano is, volcanoes are opening, or vents where lava and stream that erupt onto the earth’s surface. It is a slow process. Over time the rocks inside the volcano melt and become a thick flowing substance called magma. Eventually, this form of liquid pushes through the vents that are inside the volcano onto the surface. Magma is caused because inside the earth is hot.

Volcanos are never peaceful. They are violent. Not only do they leave destruction in its path, burning anything that it touches with lava. But it also poisons the air by spilling ash that’s mixed with rock, minerals, and glass particles into the atmosphere. This ash is nothing to be around because if inhaled it can cause problems to the body. Eye, nose, and lung problems are just a few effects that an individual could feel if they are near a volcanic eruption. Now some of you might be wondering how many active volcanoes are on the planet. According to USGS there are about 1,500 potentially active volcanoes worldwide. There are at least 26 volcanoes that are active as you are reading this right now! Even though there are a lot of potential volcanoes, this number is not including the countless volcanoes that are on the ocean floor like the Mid-Atlantic Ridge also known as the “Ring of Fire”

Only about 500 out of 1,500 have erupted in our time. Well, what happened to the other thousand volcanoes? Scientists that study Volcanic activity have said that they are “sleeping.”

Before the big eruption, people tend to feel little tremors or earthquakes weeks in advance. According to an article published by National Geographic, this is because the magma sticks to the rocks inside the volcano because it is thick most of the time. This happens until the building pressure causes it to move upwards toward the top, where the magma stays until the pressure moves it again. As the pressure builds, the tremors get smaller and happen quickly after the next until they blend into a non-stop increasing noise.
One volcano that is getting a lot of attention is the Cumbre Vieja which is stationed on the island of La Palma in the Canary Islands, Spain. The Volcano has erupted on Sunday, September 19th, 2021 and is still spilling lava onto the island. According to Aljazeera News,  La Palmas airport has closed suspending all air travel yesterday (Saturday, September 25th, 2021) but has reopened today according to Global news The airport has reopened today (Sunday, September 26, 2021)  but all flight remains cancelled due to the volcanic ash that has a major effect on air travel. 5,000 residents have been evacuated so far and no injuries have been reported.

Cumbre Vieja has always worried experts who say that since its last eruption it has leveled the island and has the potential of causing a mega-tsunami. This is a cause of a potential collapse of the western part of the volcano, on the southern half of La Palma. What could happen is that the volcano would slide down westwards into the Atlantic Ocean, going into the bottom of the sea bed it would cause the existing water to rise up, causing a huge wall of water to ripple across the Atlantic Ocean.  La Palma would witness earthquakes as the part sides into the sea. This would affect the Bahamas, the United States; greatly affecting Florida, and the Caribbean according to BBC U.k.

Chunks of the island have fallen into the sea today, so it is just a matter of time before half of the island slides into the ocean. Residents who are in the path of this disaster are being urged by the public to move inland and to warn loved ones, family members, and friends of this potential event. To learn more, click on the link below: