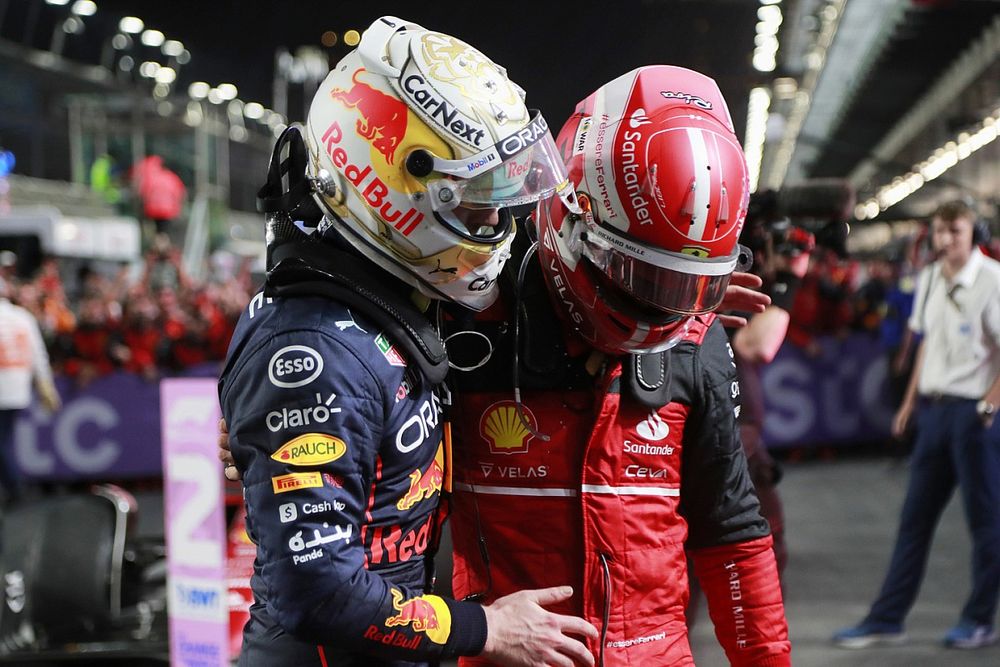 If the first two races are anything to go by, 2022 may indeed deliver an absolutely cracking season along with another epic title fight.

Red Bull’s Max Verstappen was able to hold off a last lap attack from Ferrari’s Charles Leclerc to take his first victory of the season. The defending champ again went wheel to wheel with the Monegasque in a colossal fight for the lead that spanned multiple laps. The Dutchman crossed the line to take the checkered flag just half a second in front of Leclerc’s F1-75.

Sergio Perez held the lead from pole early in the race, displaying some brilliant racecraft pulling a gap out in front of Leclerc to hold a commanding P1. This was the case until a potential bluff from Leclerc and Ferrari triggered the Mexican to dive into the pits for his first stop. Unfortunately for him, Nicholas Latifi binned his Williams for the second time in as many days to bring out a VSC which turned into a Safety Car heavily benefitting Leclerc. Verstappen and Carlos Sainz also benefited as Perez, through no fault of his own, now found himself down in fourth.

Leclerc held a relatively comfortable lead to Verstappen for the better part of almost 20 laps following the Safety Car, before lap 38 saw the retirement of both Daniel Ricciardo and Fernando Alonso, and brought out another VSC, as well as closed the pitlane with both the McLaren and Alpine, parked right at the pit entry. The VSC finished on lap 41, as Verstappen was now within striking distance, kickstarting another wheel banging scrap between the two youngsters.

With DRS, Verstappen took the lead down the back straight on lap 42, before Leclerc, with a helping of the DRS for himself, snatched it right back down the pit straight into turn 1 opening lap 43. The two drivers found themselves in the same position the following lap, headed down the back straight with Verstappen closing the gap to Leclerc. The gamesmanship then kicked in, with both drivers slowing down significantly before the braking zone, as neither wanted to allow the other to get the DRS. Verstappen locked up as Leclerc then hammered the throttle to maintain his lead.

Verstappen wasn’t able to close up as quickly this time, with his next opportunity not coming until lap 47. The Dutchman, making no mistake this time, used DRS to get past Leclerc again, with the championship leader unable to battle back. Leclerc remained close to Verstappen in the ensuing laps though, managing to pull within half-a-second in the final sector of the last lap, but it would prove not enough with the 24-year-old having to settle for second best. Despite the result, he was able to grab the extra point for fastest lap.

Esteban Ocon and Fernando Alonso gave us an exciting teammate battle in the early stages of the race, almost coming together a handful of times before being told to maintain position by team orders.

Lando Norris gave the McLaren garage some hope with a fight to the flag for sixth with Ocon. Norris would lose out to hold seventh, giving McLaren their first points of the campaign.

George Russell secured a fifth place finish for Mercedes with Lewis Hamilton giving us a mighty comeback drive from 15th on the grid. The Briton managed a 10th place finish, which could’ve been higher had it not been for the closing of the pit entry during the lap 38 VSC. Hamilton was forced to pit later, as he emerged with a new set of tires down in 13th, with just nine laps remaining.

Leclerc still holds the lead in the drivers’ championship standings as he sits 12 points ahead of teammate Sainz, as another double podium for the Scuderia gives them a comfortable 40-point lead in the constructors’ battle. With the win, as well as Perez’s P4, Red Bull now find themselves third in the standings, just a lone point behind Mercedes.

Formula One’s traveling circus now have a week off, before they head to the land down under for the first Australian Grand Prix since 2019. The weekend kicks off on April 8th, with lights out going on April 10th.