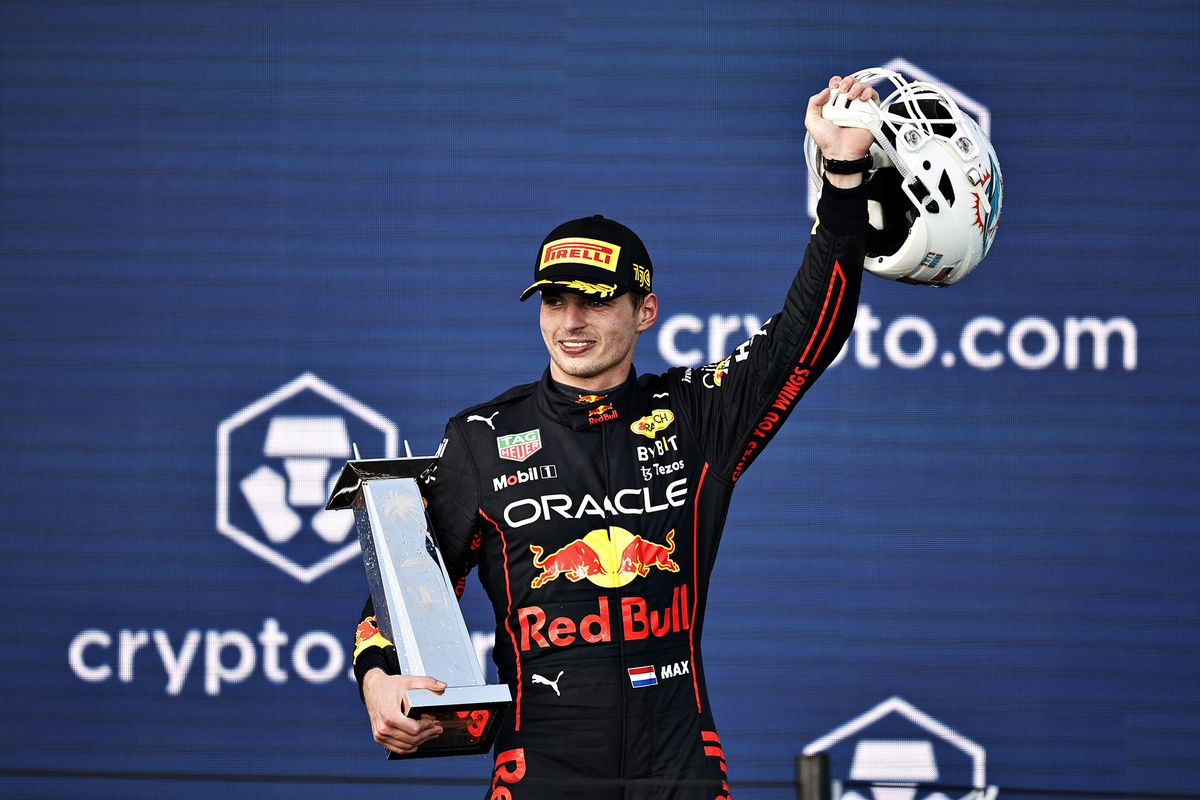 Max Verstappen survived safety car drama and a late attack from the Ferrari of Charles Leclerc, to take victory at the inaugural Miami Grand Prix

A brave lunge from the Dutchman on the outside of Carlos Sainz to start the race, seemed to set the tone for the rest of the afternoon; this race was Verstappen’s for the taking. The reigning world champion, starting third on the grid, nabbed P2 off the Spaniard on the rundown to turn one, and set off after race leader Leclerc from there on out.

The Red Bull straight-line advantage was noticeable, especially down the almost 1.3km back straight, with Verstappen pulling himself within DRS range by lap 7. After sitting in Leclerc’s gearbox for the better part of two laps, he was able to pull off the overtake for the lead down the pit straight on lap 9.

Verstappen quickly put a decent gap between himself and Leclerc in P2, with the interval reaching over seven seconds at one point. But the relatively lackluster race threw the fans a curveball, when on lap 41, a collision between Lando Norris’ McLaren and the AlphaTauri of Pierre Gasly sent Norris spinning, and out of the Grand Prix. This triggered a VSC-turned-Safety Car.

Of the front-running top four, Sergio Perez was the only car that came into the pits, opting for the yellow-striped mediums in hopes of tracking down the Ferrari of Sainz ahead. After the restart, Verstappen struggled to pull ahead as he did before, with Leclerc hounding him with DRS for a good four laps, before the pace advantage came into play again, and Leclerc was forced to back off to conserve his tires.

Perez began to cause stress for the Ferrari pitwall as the Mexican was well within striking distance of Sainz. A late lunge down the inside of turn one saw both drivers narrowly missing contact, with Perez going deep and Sainz able to keep track position and put distance between himself and the Red Bull.

Verstappen would hold on, cruising to victory at the first-ever Miami Grand Prix, with both Ferrari’s making up the rest of the podium. Perez would be hard-pressed to settle for yet another P4.

George Russell rounded out the top five, after a late tussle between him and teammate Lewis Hamilton, who finished a respectable P6.

P5 was Valteri Bottas’ for the taking, the Finn holding the position for almost the entirety of the race, before a late mistake saw him run wide at turn 17, allowing both Mercedes drivers to come through.

The Alpines of Esteban Ocon and Fernando Alonso were in P8 and P9 respectively, before the latter received his second five-second penalty of the afternoon for running wide and gaining an advantage, which demoted the 40-year-old to P11.

Alex Albon found himself in the points for the second time this season, as the Williams driver was P10 before Alonso’s penalty saw him get the bump to P9. Aston Martin’s Lance Stroll rounded out the points finishers in P10.

Kevin Magnussen was forced to retire late after contact with Lance Stroll, but Haas were still looking at a points finish, potentially the first of young Mick Schumacher’s career. The German though, tangled with compatriot and good friend Sebastian Vettel who himself was forced to retire with serious floor damage after the contact. Schumacher would be unable to recover, settling for a disappointing P15.

Verstappen’s victory makes it two in a row, as he reduces the gap to Leclerc in the driver’s standings to just 19. With the P1 and P4 finishes, Red Bull have gained ground on the Scuderia as they sit now just six points back in the constructors race.

The teams will now have another week off, before picking things back up for round six of the 2022 World Championship at a classic race in Barcelona for the Spanish Grand Prix May 20th-22nd