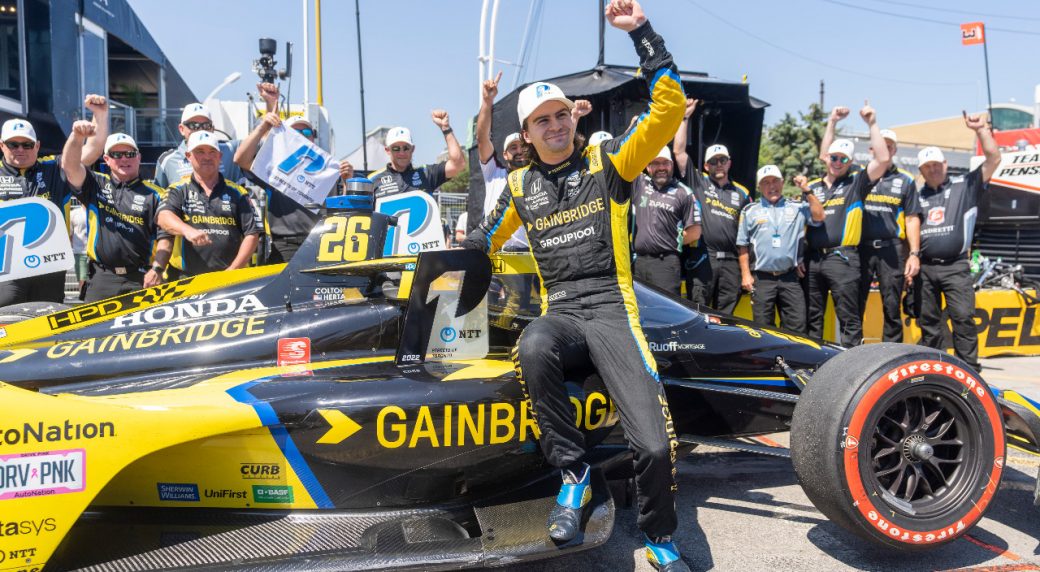 Fresh off his debut Formula One test with McLaren, Colton Herta would lay down a 0:59.269s around the streets of downtown Toronto to take his second pole of the season

TORONTO–A blistering sun, sticky humidity, and the ear-crackling sound of a 2.2L twin-turbocharged V6 engine with downshifts resembling that of a punch to the chest. Saturday afternoon at the Indy Series’ annual visit to the lakefront streets of Toronto boasted it all.

But after a two-year pandemic hiatus, the buzz of the city was evident for Indy’s return.

Fresh off a debut Formula One test with the McLaren F1 team, youngster Colton Herta cruised into the Firestone Fast Six shootout, capping a successful return to Indy with his second pole of the season - the only repeat polesitter on the campaign so far. Aussie Scott Dixon put together a brilliant lap himself in the dying seconds good enough for a front row start alongside Herta for P2.

I asked Colton about the adjustments needed to get back into the swing of things following his two-day test in Portugal just five days ago. He was adamant the differences are what allowed for the seamless transition. “It was an awesome opportunity, and something I’ll definitely remember for the rest of my life, but I got here super early on Wednesday to allow for a rest,” said the 22-year-old. “I anticipated a session or so to get back into the groove, but the different seating position and feel in the car actually kind of reminded me, like yeah, we’re back in an Indy car. It was only a couple of laps before I felt 100% back on the pace.”

The session didn’t go without a few hiccups though as hometown kid Devlin Defrancesco was only good enough to manage P12. The local racer almost had what could have been a messy coming together with eventual polesitter Herta when rejoining the track after a lockup into turn 2. “There was no light there, no marshall to wave you through, so it’s very hard to see if anyone is coming and my team can only tell me so much. It’s something that we spoke about at the drivers’ meeting and we’ll look to improve for next year.”

The Canadian’s mood changed when asked about what it meant to be racing here at home for his first career Canadian race. “It’s amazing, this was my first race I came to when I was 12-years-old. To be here 10 years later and have my best career quali is amazing. It shows the progress we’re making. Bittersweet though because I think we had more. “

CGR’s Alex Palou came into the weekend looking to leave the noise from earlier this week in his rear view mirror. The CGR team issued a press release on Tuesday stating they were exercising an option to keep the 25-year-old Spaniard in their car for next season accompanied by a quote from Palou maintaining his excitement to continue growing with the team. This was followed by a series of tweets from the defending series champion himself stating that no such agreement had taken place and that he had actually spoken to the team about stepping away to join the ever-growing roster of McLaren contracted drivers. Palou refused to comment on specifics on Friday but maintained he wouldn’t let this be a distraction that would affect his on-track performances.

Teammate and seasoned vet Scott Dixon shared his views of the situation heading into the weekend as well. The 41-year-old Kiwi has been driving for CGR since 2002 and stated how much he’s appreciated how straightforward his contract negotiations with the team have been throughout his career.

“For sure, there’s some awkwardness,” the six-time IndyCar champion said of the vibe within the team. “You know, if you’re going to have an example of how not to go about things, this is 100 percent how you would do it.”

Palou’s qualifying wouldn’t produce the results he would have wanted though as he would fail to make it out of Q1, when an engine failure caused him to stop down the back straight during his group 2 running.

The race will get underway on what is looking to be a beautiful Sunday afternoon in the city with the green flag waving at 3PM EST.