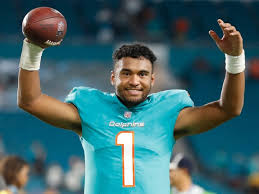 The Miami Dolphins stunned the fans with a 42-38 win after a deficit of 35-14. Quarterback Tua Tagovailoa threw four fourth-quarter touchdown passes (two to WR Tyreek Hill). Tua captured a special place in Dolphins history by joining Hall of Famers Bob Griese and Dan Marino in throwing six touchdowns in one game.

The New York Jets were down 13 points but came back to beat the Cleveland Browns 31-10.

The San Francisco 49ers lost their starting quarterback Trey Lance (#3 pick in the 2021 draft) for the season due to an ankle injury. Veteran QB Jimmy Garoppolo will take over the reins.

In the Monday night doubleheader, the Buffalo bills outscored the Tennessee Titans 41-7, while the Philadelphia Eagles overshadowed the Minnesota Vikings for a 24-7 win.