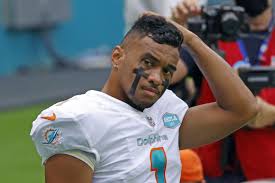 The Cincinnati Bengals beat the previously undefeated Miami Dolphins on Thursday Night Football, but that wasn’t the main story of the evening. Miami Dolphins quarterback Tua Tagovailoa hit his head after being sacked in the second quarter of the game and remained on the field for 10 minutes. He was taken to the hospital on a stretcher, but thankfully the Dolphins announced at halftime that he had movement in all of his extremities and was going to join the team on the flight home. He’s being treated for a concussion, but what is making people extra concerned is that Tua went down last Sunday with an apparent head injury but was brought back on the field after passing concussion protocol. The NFL Players Association is thankfully reviewing the NFL’s concussion protocol after these two scary back-to-back incidents.