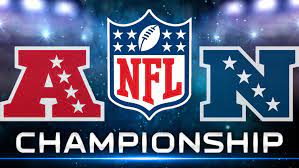 The NFC and AFC Championship games are set. In Saturday's matchups, the Kansas City Chiefs (with quarterback Patrick Mahomes playing through an ankle injury) will head back to the AFC title game for the fifth consecutive time. The Chiefs beat the Jacksonville Jaguars 27-20. And, the Philadelphia Eagles will compete next week for the NFC title after demolishing the New York Giants 38-7.

On Sunday, the Cincinnati Bengals handily defeated the Buffalo Bills 27-10 and eliminated the need for the NFL to provide a neutral site for the AFC Championship game (which would have been necessary if the Bills and Chiefs played each other). In the final game of the weekend, the San Francisco 49ers eliminated the Dallas Cowboys 19-12.