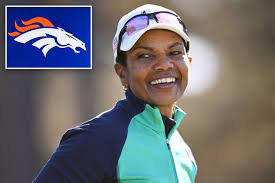 Portland signed Damian Lillard to a 2-year, $122 million extension which ties him to the team through the 2025-6 season. Lillard was drafted by the Trailblazers in 2012 and has played with the team ever since.

The deal isn't finalized yet, but according to reports, James Harden will accept a $15 million cut in salary to stay with the Philadelphia 76ers.

Former Secretary of State Condoleezza Rice will join the Broncos as a minority owner.