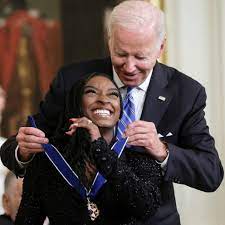 The Cleveland Browns' #1 pick in 2018, quarterback Baker Mayfield, has been traded and will now compete for the starting job in Carolina against Sam Darnold (the #3 pick in 2018).

President Biden awarded the Presidential Medal of Freedom to 17 people including gymnast Simone Biles (youngest to ever receive this honor) and soccer player Megan Rapinoe.

The horse racing industry implemented new safety rules including limiting the use of the riding crop (whip) during races and prohibiting devices (like cattle prods) that are used to desensitize horses.

Rafael Nadal had to withdraw from his semifinal match at Wimbledon because of an abdominal tear. Nick Kyrgios will now face either #1 seed Novak Djokovic or #9 seed Cameron Norrie.