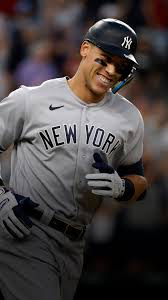 Aaron Judge hit his 62nd home run of the season and now holds the record as the American League’s single-season home run leader. Judge broke a tie with Roger Maris who had hit 61 home runs in 1961 for the NY Yankees. According to reports, Judge turned down a $213.5 million extension with the Yankees in anticipation he would increase his value this season (which he will). Also, the fan who caught Judge’s record 62nd hit could sell the ball for $2 million.