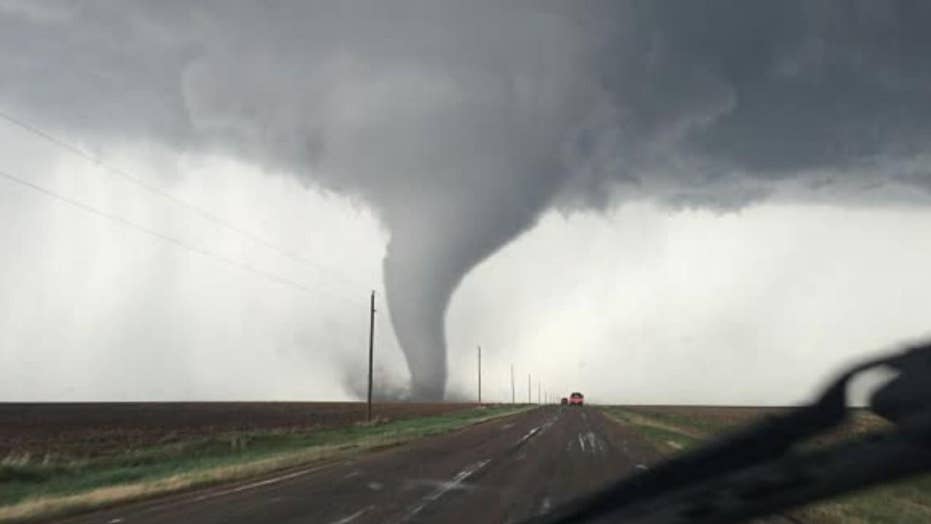 When you see a spinning wall of wind you do not want to be in the middle of it. Most likely it’s a tornado. According to the NOAA National Severe Storms Laboratory, a tornado is a narrow, violently rotating column of air that extends from a thunderstorm to the ground. Many people won’t be able to see a tornado unless it forms in an air funnel, this is made up of water droplets, dust, and debris. According to Cnet, there are several types of storms. Thunderstorms, supercells, squall lines... Just to name a few.

Meteorologists have invented categories to measure the winds of tornados. According to National Oceanic and Atmospheric Administration, Tornadoes are categorized by density; weak strong and violent. Weak is an EF0, EF1 that has wind speeds of 65 to 110 miles per hour. Strong is an EF2, EF3 which has wind speeds of 111 to 165 miles per hour. And then there is EF4, EF5. This is the strongest as it has wind speeds of 166 to 200 miles per hour or more. Over the years these tornadoes have grown stronger and more violent, in one tornado season, there have been more EF4’s and EF5's than any other tornadoes. In places where tornadoes are common, warning systems have been placed to warn the residents in the way of the approaching danger. Even though warning systems with projecting a loud siren, people can’t help to find that it would be more beneficial if the alert came through a text message also so that it would give them time to prepare in their homes.

There are seasons when tornadoes are most likely to happen. For example, the transition between summer to fall is brutal because of the change in temperature and not all places experience the transition at the same time. In Canada, our transition is from May to September but in most parts of the United States, September, November, and December are when the transition from summer to fall happens. This causes violent storm systems. The latest tornado happened all throughout the week of December 10th to December 17th. The storm developed as a trough and began to move eastward across the states. The tornado activity began in northeastern Arkansas, before progressing into Missouri, Illinois, Tennessee, and Kentucky.  According to National Oceanic Atmospheric Administration, on the evening of Friday, December 10, 2021, NWS storm surveys found a violent EF4 among the superstorm that damaged many homes and killed seventy-seven people in what officials are calling the deadliest storm in the state’s history!

Tornadoes can happen anywhere at any time. The only notion to do is to prepare.  Keep an eye on the sky. If you see a funnel-shaped cloud that extends towards the ground or if the sky is dark, green, or yellowish and if you hear a loud roaring sound get to a safe area right away. Preparing ahead of time (if possible) is the best option. Putting objects away that could get tossed into the air easily would decrease your chances of getting injured; cleaning the back and front yard is also important as well because there could be branches or loose stones or debris that could get thrown if the winds are strong enough. Moving any furniture from the backyard can also help decrease the chances. Having an emergency kit handy can also be useful as well, this would include water and canned/ dried food; water to last three days (per person); a battery-powered radio; a flashlight; extra batteries for radio and flashlight; portable charger for a cellphone; and a first aid kit.

Tornadoes have seasons as do hurricanes, it’s the violent side of nature. To learn more about Tornado seasons and how to prepare if a tornado comes your way, click on the link below: