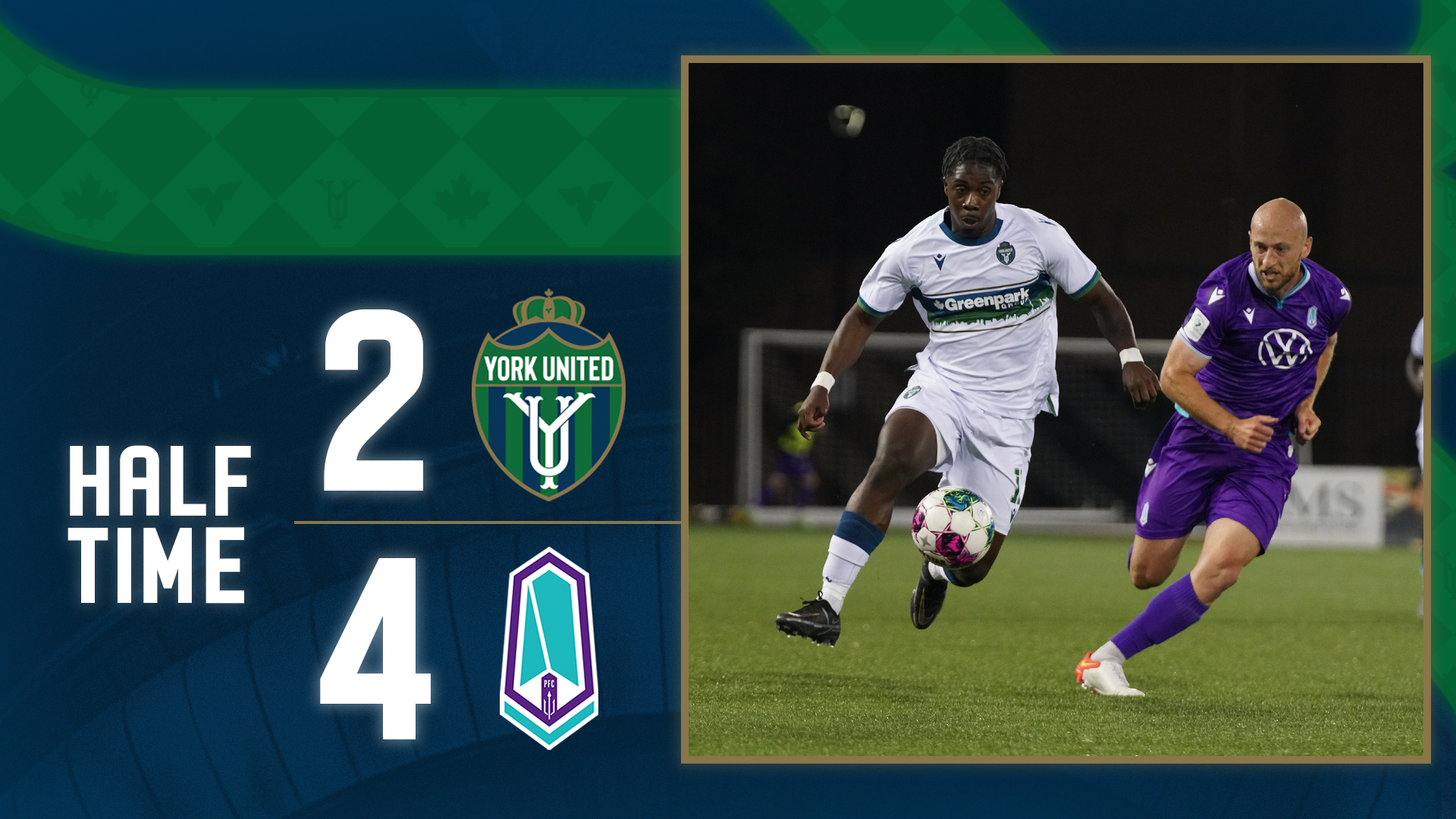 It was a rollercoaster of emotions for York United FC as Alejandro Diaz's hat trick helped lead Pacific FC to a 4-2 win at York Lions Stadium.
York United FC head coach Martin Nash went with a 4-2-3-1 formation: Niko Giantsolpoulos started in-goal; Tass Mourdoukoutas, Dominick Zator, captain Roger Thompson, and Chrisnovic N'Sa on the backline; Cedric Toussaint, Isaiah Johnston, Noah Verhoeven, Ronan Kratt, and Max Ferrari in the midfield; and Osaze De Rosario as the lone striker.
York were looking to bounce back from last week's loss to their rivals Forge FC. They had reinforcements off the bench if needed as both Michael Petrasso and Lowell Wright that they could call upon, which is a relief as their lineup has been depleted due to injury.
It was the perfect start for York as they wasted little time getting on the scoresheet. In the first minute of play, Kratt received a pass from Johnston and took advantage and struck a shot from close-range to beat Pacific goalkeeper Callum Irving. It was a positive sign from York as they were aggressive from the start and took chances offensively.
Pacific weren't discouraged from the early goal and didn't deviate from their gameplan.
York had another scoring opportunity in the 23rd minute off the counter-attack. N'Sa beat the Pacific defenders to the ball and found Ferrari, whose shot was blocked.
Pacific were awarded a penalty in the 40th minute after Gianni Dos Santos was brought down in the box. Alejandro Diaz stepped up to the spot for his club and was successful. He got Giantsopoulos guessing wrong and scored the equalizer.
Like they did in the first-half, York scored an early goal to start the second half after a wonderful effort from Johnston that saw him maneuver his way around three Pacific players and laid it off to De Rosario, who made no mistake and struck it past Irving to regain the lead for York.
DeRo has been a great story for York United FC this season as he leads the club in goals scored. It was an encouraging sign as the club responded from the equalizing penalty late in the first half.
York  continued applying pressure on Pacific and kept them on their heels. Thompson was at facilitating the offense from the backline and the midfield were causing trouble for Pacific with their link-up play off the wing. The Nine Stripes had two scoring opportunities but both De Rosario and Kratt hit the post and crossbar respectively.
In the 63rd minute, Pacific scored the equalizer off a set piece play after the ball was lobbed into the box and found Diaz, who scored his second of the match. The visitors added another goal and it was Diaz once again, who completed the hattrick in the 71st minute off the counterattack.
Petrasso made his return to the lineup in the 80th minute. It was only his third appearance of the season as he's been out of the lineup due to injury. He plays a crucial role when he's in the lineup and he adds another offensive threat in the midfield.
Ferrari was forced to leave the match after colliding with a Pacific player against the advertising boards along the sidelines. During his post-match press conference, head coach Martin Nash confirmed that Max Ferrari injured his ankle and that it didn't look positive.
"He'll be out for a period of time. How long it is? I don't know," said Nash.
York were unlucky once again as Pacific added a fourth goal in the 87th minute. The goal came after York's set-piece on the opposite end of the field. Pacific managed to clear the ball and Dos Santos struck it past Giantsopoulos, to extend their lead to 4-2 and put the match out of reach.
Photo Credit: York United FC