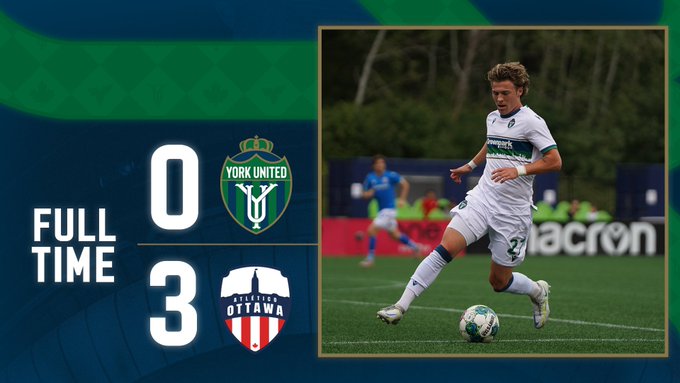 Atletico Ottawa took advantage of their opportunities off the counterattack and shut out York United FC 3-0 at York Lions Stadium.
York United head coach Martin Nash went with a 3-4-3 formation with Niko Giantsopoulos in-goal; Tass Mourdoukoutas, captain Roger Thompson, and Dominick Zator as the three central defenders on the backline; Chrisnovic N'Sa, Cedric Toussaint, Noah Verhoeven, and Luis Lawrie-Lattanzio in the midfield; and Ronan Kratt, the debuting Kevin Santos, and the club's leading goalscorer Osaze De Rosario in the attack.

York didn't get off to a great start as they conceded a penalty in the opening 10 minutes of play. Ottawa midfielder Ballou Tabla stepped up to the spot and struck a nicely placed penalty to give his team the early lead.

Lawrie-Lattanzio did well on the attacking-end. He was creating plays from a wing-back role and did a great job in with his crafty offense. The club has struggled all season, which has made it increasingly difficult to the fill the many voids in their starting lineup. Nash is hoping his young signings will bring stability and have a strong presence going forward.

Atletico Ottawa added another goal in the 35th minute after Brian Wright received a through ball that left him all alone and he made no mistake as he struck the ball past Giantsopoulos to extend the lead to 2-0. Ottawa were close to adding a third goal prior to the end of the half, but Wright headed the ball over the crossbar.

It was a much better effort to the second half for York. They were more aggressive and tested Ottawa goalkeeper Nathan Ingham with their shot selection.

York's afternoon got worse as they conceded yet another penalty in the 63rd minute. This time, Ollie Bassett stepped up to the spot and beat Giantsopoulos with a perfectly struck penalty to give Ottawa a 3-0 goal lead.

Nash added three attackers in an effort to shift some of the momentum in York's favour. Michael Petrasso, Lowell Wright, and Matteo Hernandez were subbed on to provide an offensive boost.

York's best opportunity came in the 79th minute when a link-up play resulted in Toussaint getting enough space to take a shot on-goal, but it went off the post and out of play for a goal-kick. The Nine Stripes were unlucky the entire match and couldn't find the back of the net.
Photo Credit: York United FC (@yorkutdfc - Twitter)