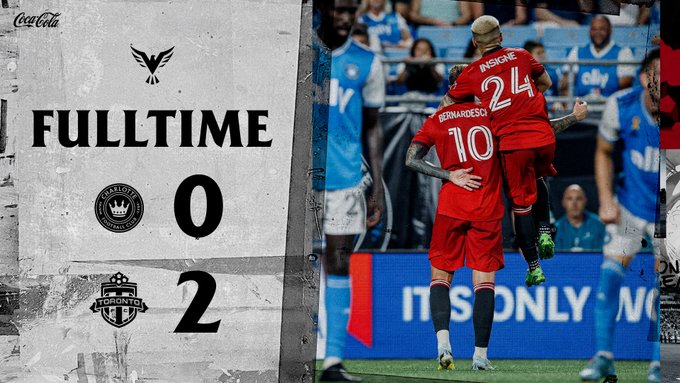 Federico Bernardeschi’s 66th minute goal ended up being the game winner as Toronto capped off a strong second half that saw them score two goals and earn a clean sheet and crucial three points on the road.

Coach Bradley was forced to rely on his youngsters in the midfield as both Jonathan Osorio and Mark-Anthony Kaye were out of the lineup and didn’t make the trip to Charlotte.

As a result of the weather conditions, the match was delayed for well over an hour.

Toronto had their fair share of struggles in the first half. Charlotte striker Karol Swiderski posed a threat on the offensive end and had a few scoring opportunities, but was unable to find the back of the net.

Kerr was forced to leave the match due to an injury and was replaced by Kosi Thompson. This was another blow to TFC’s midfield which was already without Osorio and Kaye.

It was a much better effort for Toronto in the second half. They took the lead in the 49th minute off a set-piece play. Bernardeschi’s corner-kick found Insigne, who struck the ball off the crossbar and into the net.

There was another moment of brilliance from the Italian wingers in the 66th minute, when Bernardeschi received a pass from Insigne and used the space to dribble in Charlotte’s box and strike a fantastic ball that curled past Kristijan Kahlina.

To put the performances into perspective, Bernardeschi has been with the team for only a month and is 4 goals shy of the team lead.

It was a great bounce-back performance for Bono, who had a rough outing in last weekend’s loss to Inter Miami. During his post-game media availability, Bono reflected on his performance and earning the clean sheet, and described the mentality of the club going into the final stretch of the season.

“As we get down the stretch here, everyone has to kind of carry their own weight and no surprise, I was a little disappointed with the weight I wasn’t carrying over the last couple of games,” said Bono.

Toronto's win moves them back within three points of the final playoff spot in the MLS Eastern Conference. They now return to Toronto for a two-game homestand that will see them welcome back Victor Vazquez, Mark Delgado, and former coach Greg Vanney to BMO Field on Wednesday night. Then on Sunday, they host rivals CF Montreal.