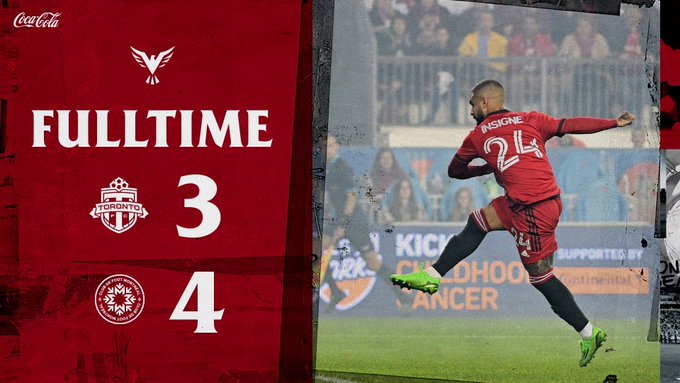 CF Montreal rallied back from a lackluster start to match and scored 4 straight goals to earn three points on the road.

Toronto head coach Bob Bradley went with a 4-3-3 formation: Alex Bono started in-goal; Richie Laryea, Shane O'Neill, Chris Mavinga, and Domenico Criscito on the backline; Jayden Nelson, Noble Okello, and captain Michael Bradley in the midfield; and Federico Bernardeschi, Ayo Akinola, and Lorenzo Insigne as the attacking trio. Mark-Anthony Kaye was on the bench to start the match. He was making his first appearance since recovering from an injury that kept him out of the lineup for a month. Regardless of where they are in the standings, it's always an exciting matchup when the two rivals play each other. Toronto came into the match following their midweek draw with the LA Galaxy, while Montreal came into the match following their 1-0 loss to the New York Red Bulls. Montreal has had an impressive turnaround this season as they sit in 2nd place in the MLS Eastern Conference standings. Romell Quioto was definitely a player that TFC had to contain if they wanted to secure three points at home. He has scored 15 goals and collected 4 assists in 21 starts this season. There was a VAR review in the third minute after the referee was notified that that Akinola was fouled in the Montreal box. After reviewing the play, Toronto was awarded a penalty kick. Bernardeschi stepped up to the spot and struck a perfect penalty to give TFC the early 1-0 lead. The goal was Bernardeschi's 7th goal in 9 matches. Insigne would make his presence felt as well as he extended the lead with a fantastic goal off a volley. The goal was Insigne's 5th of the season, so the Italians have continued contributing on the offensive end. Toronto were off to a great start as they had a 2-0 in only the 7th minute. CF Montreal answered with a goal of their own in the 19th minute after a rebound by Bono led to Kamal Miller striking the ball in the back of the net. The Canadian international's goal got Montreal back into the game and within reach. Shortly after the goal, Djordje Mihailovic scored a spectacular goal from outside the box to level the scoring in the 21st minute. The first 20 minutes of the match was eventful. Toronto were the much better side in the first 10 minutes, while Montreal shifted the momentum and were the better side in the next 10 minutes.  Kei Kamara scored in the 42nd minute after beating Mavinga to the ball and striking it through Bono's legs to give his side the lead heading into halftime.

It was disappointing for Toronto as they were in control early in the game but were unable to remain structured defensively, which cost them as the half progressed.

Kaye was subbed into the match at the start of the second half in-place of Nelson. Bradley went with another change on the backline as Doneil Henry subbed in for Mavinga.

Montreal extedned their lead in the 54th minute Kamara received a cross from Quioto and headed it to his teammate Alistair Johnston, who headed it in the back of the net to make it 4-2 for the visitors.

Toronto had a great opportunity to get back within one in the 70th minute when Bernardeschi found Kaye in the box with a nice cross, but the Canadian international headed the ball wide of the net.

Insigne scored in the 92nd minute after battling through the Montreal backline and caused a turnover, which led to him regaining the ball and chipping it over the goalkeeper, to make it 4-3.

The goal was too late to start a comeback as there was less than one-minute left in stoppage time. And so, TFC missed a great opportunity to secure three points at home and have a tougher road to earning a potential playoff spot