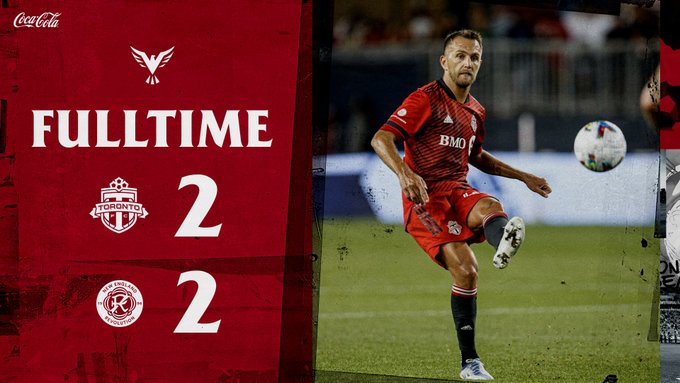 Domenico Criscito scored his first MLS goal from a stunner outside the box as Toronto FC played the New England Revolution to a 2-2 draw,
Toronto head coach Bob Bradley made one change to his starting lineup for tonight's game.  Alex Bono started in-goal; Richie Laryea, Lukas MacNaughton, Chris Mavinga, and Domenico Criscito on the backline; Jayden Nelson, Jonathan Osorio, and captain Michael Bradley in the midfield; and Lorenzo Insigne, Ayo Akinola, and Federico Bernardeschi as the attacking trio.
It was a great opportunity for Akinola as he was starting in-place of Jesus Jimenez, who has struggled to find his form after an impressive start to the season. If he could develop chemistry with Insigne and Bernardeschi  and find his scoring touch, he could possibly regain his place as the starting striker, especially considering Toronto are pushing for a playoff spot.
Central midfielder Mark-Anthony Kaye was out of the lineup for TFC as he continues recovering from an injury.
Toronto were off to another great start. Their attackers were aggressive off the wing and Nelson, who's confidence continues to grow, tracked back and retrieved the ball, so TFC could continue pushing towards goal.
Bernardeschi had a nice attempt in the 14th minute after using the space available to strike a shot near-post, which has been his strength but was stopped by Revolution goalkeeper Djordje Petrovic.
Coach Bradley swapping Jimenez for Akinola seemed to be working in the first half. The Canadian getting to the ball, taking shots on-goal, and getting a head on cross into the box. In the 29th minute, Akinola drew a penalty for Toronto after Revs defender Christian Makoun brought him down in the box.
Bernardeschi stepped up to the spot and made no mistake as he struck a perfectly placed penalty that beat Petrovic far-post to give Toronto the 1-0 lead. The Italian winger has played in 5 MLS matches and already has 4 goals.
New England responded by scoring the equalizer in the 37th minute after Bono's save led to a rebound that Thomas McNamara immediately got a touch on the ball.
Mavinga continued to be a strong presence on the backline in the opening 45-minutes. He made a crucial tackle and broke up plays, which limited the number of opportunities for New England and turnovers for Toronto.
The Revolution didn't waste any time taking the lead in the second half. After finding an opening in the TFC backline, Justin Rennicks received a through ball and struck it past Bono to give New England the 2-1 lead.
There was a frustrating moment in the 59th minute as Laryea was brought down in the box, but the referee didn't feel there was a foul.
Toronto were close to scoring an equalizer in the 69th minute off a Bernardeschi corner-kick, but the ball was headed away by former TFC defender Omar Gonzalez before it could get into the net.
TFC's resilience paid off in the 76th minute as Criscito scored his first MLS goal to level the scoring. Bradley spotted him with a cross and he finishes with a spectacular one-touch strike from outside the box. The goal brought energized the crowd at BMO Field in the final stretch of the match.
Jesus Jimenez had a great opportunity to snap his scoring slump when he received a through ball in the 81st minute, but he struck the ball wide of the goal.
Despite having opportunities to win the game in the final 10 minutes, Toronto would have to settle with a hard fought point as they played the Revolution to a 2-2 draw.
Photo Credit: Toronto FC (@TorontoFC - Twitter)