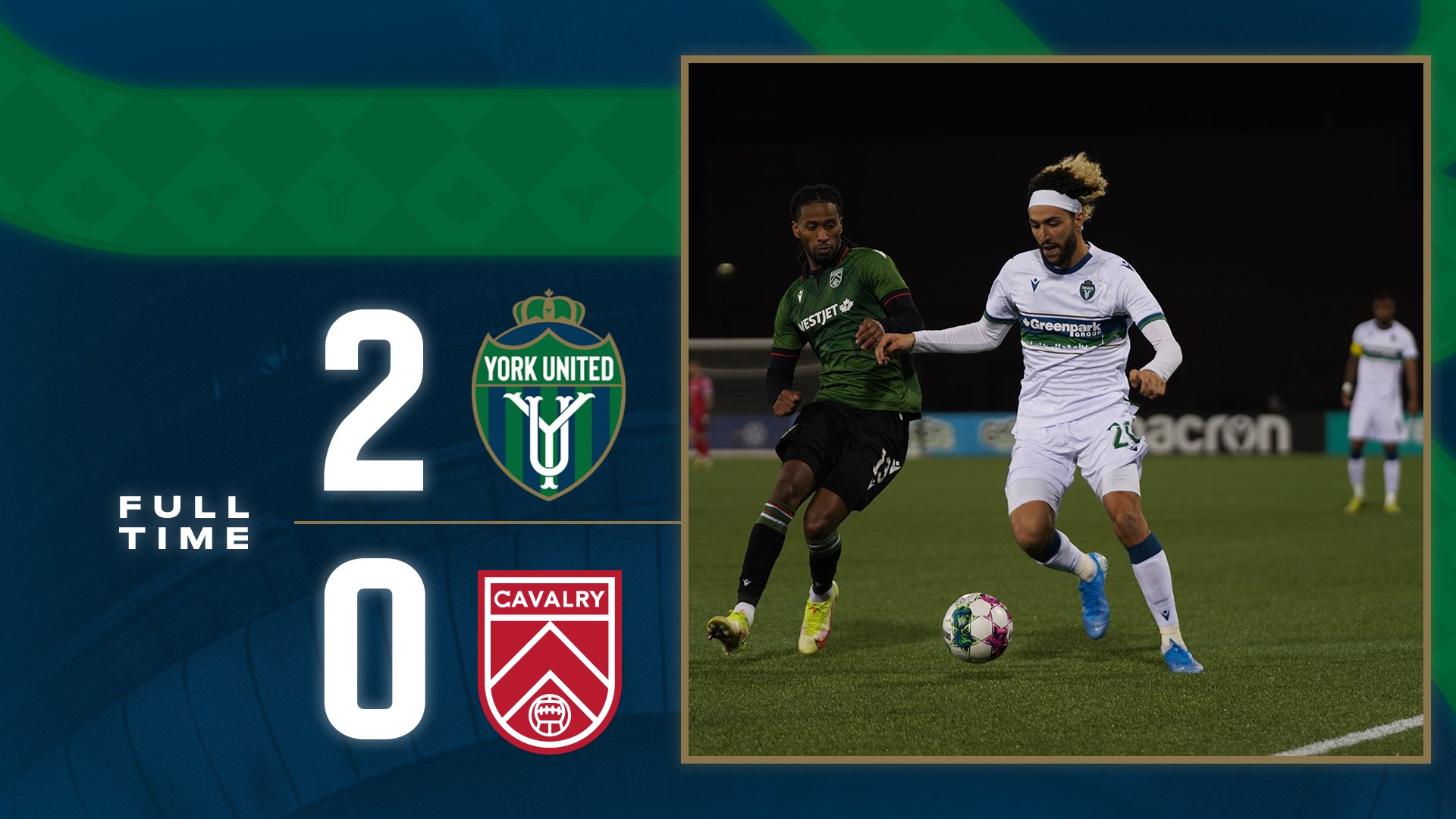 Osaze De Rosario's second-half goal sealed York United FC's first win of 2022 CPL season in what ended being a chippy affair at York Lions Stadium.
York United were looking to build on last week's 1-1 draw when they took on the visitors Cavalry. It was a reunion of sorts as it was Martin Nash's first game coaching opposite Tommy Wheeldon Jr. The York head coach served as Wheeldon's assistant coach while at Cavalry.
Martin Nash went with the 4-2-3-1 formation that he has become familiar with. Niko Giantsopoulos starting in-goal; Chrisnovic N'Sa, Dominick Zator, captain Roger Thompson, and Diyaeddine Abzi on the backline; Jordan Wilson, Noah Verhoeven, Isaiah Johnston, Oliver Minatel, and Max Ferrari in the midfield; and Osaze De Rosario as the striker.
De Rosario was close to putting York United on the scoresheet in the 8th minute when Cavarly's goalkeeper Julian Roloff unsuccessfully cleared the ball away. He struck the ball just wide of the net. It was a good effort for De Rosario, who scored his first CPL goal in last week's 1-1 draw to FC Edmonton.
Moments later, Oliver Minatel found an opening in Cavalry's backline and struck a shot on goal that was stopped by Roloff. The Cavalry goalkeeper had to come up big for his side once again as Johnston did the same moments later. The saves allowed Cavalry's backline to regroup and find their composure defensively.
York's persistence on the offensive-end paid off in the 35th minute as Johnston's cross found Minatel, who headed it in the back of the net to give his side the 1-0 lead over his former club. It was an excellent display from Johnston, who got the play started and linked up with Minatel on the goal.
York were in a favourable position as they had the momentum and 1-0 lead heading into halftime.
Cavalry had the majority of possession, but were unable to find an answer for York's counterattack. York were also more consistent in the second half. Ferrari, Minatel, and Johnston continued to link-up well with each other. There was even a moment that looked as though York were about to extend their lead to two, but Ferrari's shot went over the bar.
De Rosario eventuall scored to give York the 2-0 lead following a perfectly placed shot on goal. It was his second goal of the season and extended his goal scoring streak to two matches.
Austin Ricci subbed into the match in the 81st minute for De Rosario. Ricci re-joined the club following an excellent season with Valour FC. His season was unfortunately cut short due to an injury, but now returns to a club where he could play a crucial role on.
York United will look to continue their winning streak when they host Atletico Ottawa next Friday at York Lions Stadium.
Photo Credit: David Chant/York United FC (@YorkUnitedFC)