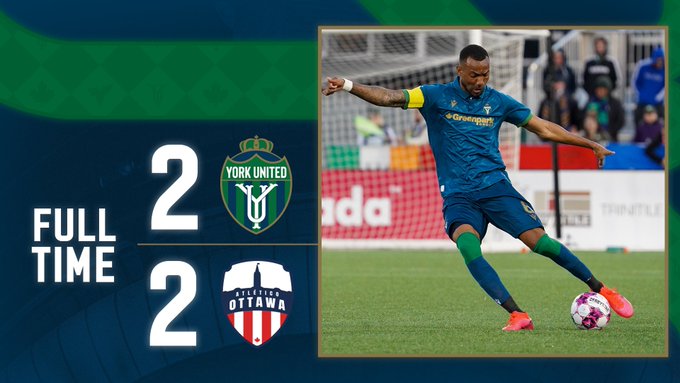 Dominick Zator was the hero for York United FC as he scored the equalizer in stoppage time to secure a point at home. The draw also extends the club's unbeaten streak to three-straight matches.

Minatel was subbed off in the 21st minute after sustaining an injury. It was unfortunate as he has dealt with a long injury in the past. He has performed well since joining York. And so, he will be a big loss for Nash's side as Michael Petrasso is expected to be out of action for the next few weeks due to an injury.

York had great link-up play in the midfield, which resulted in the team being able to attack with speed. Johnston was doing an excellent job maneuvering his way around Ottawa's defenders and created plays for his teammates. They had their moments towards the end of the half, but couldn't convert on the opportunity on the set-piece plays.

Gutierrez took a chance early in the half and attempted a bicycle kick that narrowly missed the net wide. It was a great effort that surely would've had the fans on their feet at York Lions Stadium.

Moments later, Ottawa got on the scoresheet as Brian Wright struck nicely placed shot on goal that beat Giantsopoulos far-side. It was an excellent pass from Ollie Bassett that started the play and Wright finished it with his left foot.

York were awarded with a penalty kick after De Rosario was taken down in the box by Ingham. The goalkeeper mistimed his challenge and was shown a yellow card. De Rosario stepped up to the penalty spot and scored the equalizer for York.

Lowell Wright then subbed into the match. This was a tactical change of sorts for Nash as he was going to with two strikers up top. During yesterday's media availability, Nash mentioned that he wouldn't be opposed to playing both De Rosario and Wright together and it'll depend on situation.

Despite York maintaining possession and getting numerous scoring opportunities in the second-half, Ottawa would be the one to score the goal. Ballou Tabla received the ball off a counter-attack and struck the ball past Giantsopoulos to regain the lead for Ottawa in the 86th minute.

Cedric Toussaint was shown a red card and sent off in the 90th minute for his challenge on Chris Mannella.

It was a thrilling final few minutes as York scored the equalizer on another set-piece play after Zator received the ball in the box, turned, and struck it past Ingham.