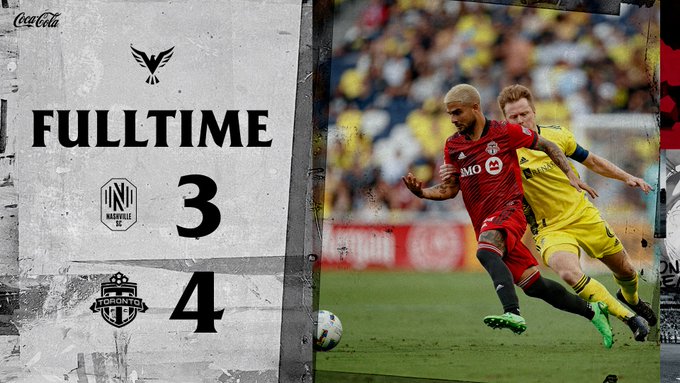 Lorenzo Insigne's first MLS goal turned out to be the game winner as Toronto FC picked up their first road win of the season to move within 4 points of the final playoff spot in the MLS Eastern Conference.
Toronto head coach Bob Bradley went with  a 4-3-3 formation with Alex Bono in-goal; Domenico Criscito, Chris Mavinga, Lukas MacNaughton, and Richie Laryea on the backline; Jayden Nelson, Jonathan Osorio, and captain Michael Bradley in the midfield;  and Lorenzo Insigne, Jesus Jimenez, and Federico Bernardeschi in the attack. It was a big match for Toronto as they came into the match 6 points back of the final playoff spot in the MLS Eastern Conference.
TFC had more reinforcements as Laryea made his return to the club. He was re-acquired on loan from Nottingham Forest and will bring much-needed stability on the backline. It helps that he is familiar with the squad and can contribute immediately.
Insigne did well early on as he drew fouls and provided Toronto an opportunity to test Nashville SC goalkeeper Joe Willis. Toronto were in control throughout the first-half through their link-up play off the wings during which Insigne and Laryea were heavily involved.
TFC were the more intense side and it paid off as they got on the scoresheet in the 19th minute. Osorio received the ball with plenty of space and patiently brought the ball to his left-foot, and struck a nicely placed shot past Willis to give Toronto the 1-0 lead.
The final minutes of the opening 45-minutes were quite eventful. Nashville leveled the score after a mistimed challenge by Bono resulted in a penalty being awarded to the hosts. Mukhtar made no mistake from the spot and he buried the ball in the back of the net for his 13th goal of the season.
Despite the penalty, Toronto continued applying pressure and pushing forward and a sequence of passes led to Osorio scoring his second goal of the match following a cross pass from Laryea. The first-half brace was Osorio's 7th and 8th goal of the season.
Nashville once again scored an equalizer off a corner kick that ended with Bunbury heading the ball past Bono. Looking at the replay, Bunbury was in an offside position when he got a touch on the ball. And so, it didn't sit well with TFC players when VAR determined that it was a good goal instead of overturning it.
Toronto regained the lead in the second half after Laryea was brought down in the box in the 52nd minute, which resulted in a penalty-kick being awarded. Bernardeschi stepped up for his club and converted with a nicely placed penalty. Last week, Insigne was unsuccessful with his penalty attempt, so Bernardeschi's success from the spot could result in him being relied on to take penalties from now on.
Laryea was subbed off in the 64th minute for Jahkeele Marshall-Rutty. Considering he hadn't played a competitive match in months, it was a great performance for Laryea. He reflected on his return and spoke highly of the club.
"The love I have for this club (Toronto FC) is unconditional. Being back here and playing with a few guys that I played with before and then joining up with some guys was cool. It was nice," said Laryea.
"It's done a lot for me and my family. It's always good to put on this shirt," Laryea added.
In the 77th minute, Toronto extended their lead to two after a fantastic strike by Insigne put them up 4-2. It was vintage Insigne as his shot  from outside the box curled past Willis.
Nashville were resilient to the end as Walter Zimmerman scored a goal in the 84th minute to get the team within one. The goal led to the final moments of the match being hectic. Toronto managed to hold on and earn their first road win of the season.
Photo Credit: Toronto FC (@TorontoFC - Twitter)