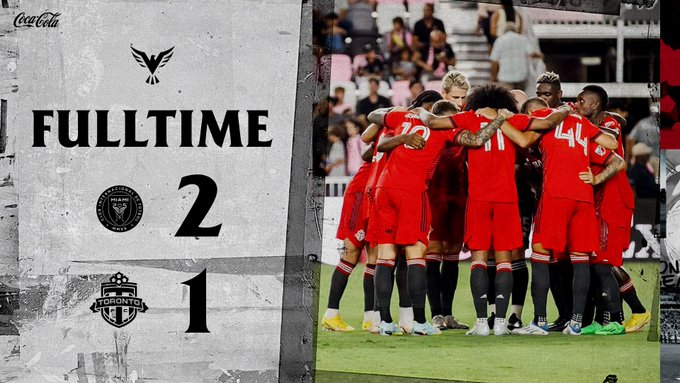 Inter Miami picked up a crucial three points and moved into a playoff spot after a 2-1 win against Toronto FC.

TFC came into the match just three points back of a playoff spot and were looking to tie Inter Miami with 33 points in the standings. Standing in their way was former MLS MVP Alejandro Pozuelo, who was playing against his former club for the first time since being traded to Miami for allocation money.

Jesus Jimenez wasn’t in the lineup as he didn’t travel to Miami with the team. Instead, he will re-join the club for training back in Toronto on Tuesday.

Both Insigne and Bernardeschi had something in common as they were playing their former teammate Gonzalo Higuain for the first time in MLS. For years, Higuain and Insigne played together at Napoli, before the Argentine left the club in favour of a move to Juventus, where he eventually played with Bernardeschi and won the Scudetto.

Miami got on the scoresheet first after an error from Bono. Gonzalo Higuain found his teammate Jean Mota, who struck the ball on goal. Bono was in a great position to make a routine stop, but he deflected into the net.

Insigne evened the scoring in the 27th minute with a fantastic strike from outside-the-box. Bernardeschi’s original shot was blocked, which led to Insigne finishing with a one-touch strike.

Miami regained the lead prior to the end of the first half after Ariel Lassiter found enough space to get a shot on goal which again deflected off Bono and into the net.

Despite looking like the better team in the first half, Toronto were facing an uphill battle going into halftime because they needed to score two goals in the second half if they wanted to earn the full three points.

TFC were unable to score an equalizer in the second half. They had some promising moments, but they couldn’t finish their chances.

As the half progressed, Toronto began looking more sluggish as the conditions seemed to have been taking a toll of the players. Head coach Bob Bradley subbed on Achara and Kerr for Nelson and Akinola, but they were unable to find the offensive spark to tie the match like they did midweek against New England.

With the loss, Inter Miami now move to 5th place in the MLS Eastern Conference, while Toronto FC remain 4 points back of the final playoff spot.